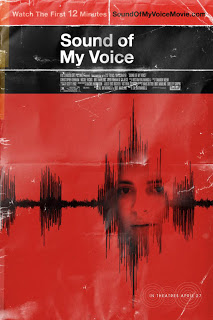 Sound of My Voice is going to be a bit of a hard film to talk about, since I don’t want to reveal too much about how it turns out.  However, I will try my best.

The film is about a journalist named Peter and his girlfriend Lorna, who infiltrate a cult lead by a mysterious girl named Maggie.  Maggie claims that she is from the future and that she is there to spread her wisdom.

Peter is creating a documentary about cults and hopes to expose Maggie for the fraud that he believes that she is.  However, as time goes on, Peter begins to feel a deeper connection with the Maggie and begins to become more of a believer, which results in him becoming somewhat estranged from Lorna.

That’s pretty much all I will say about the plot of the film.  I will say that the film was advertised as being much more of a thriller than it turns out to be, even though I still ended up liking the film.

In the end, whether you like it or not, I am certain that Sound of My Voice will get you thinking and will warrant plenty of discussion.