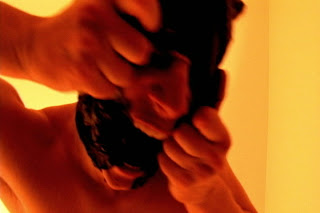 Yesterday I went to a private screening of an ultra-low budget horror film entitled Beneath.  The film was directed my friend and old York University classmate David Hollands, who had been working on the film since he shot it back in 2007 (while we were still students, he had a screening of earlier cut, then titled Numb, at the University).

Before I start my discussion on the film itself, I do have to make a comment that it was a great achievement for a film with only a $1000 budget to get a (high definition) screening in a proper movie theatre (I was asked not to disclose the theatre, but I will say that it was one of the major chains).  It definitely helps to spread hope for those wannabe filmmakers out there.


Onto the film itself.  I’ve decided not to delve too much into the story, but I will say that it focuses on three roommates, who live in a home that contains a malevolent spirit.  It’s a somewhat basic story, though it does feature some interesting twists and turns.

I decided that I would talk about the film more from a technical standpoint.  For starters, you can tell that the film was very low budget and it looks very much like home movie footage, though I would have to say that at times this works in the film’s favour.  The plot of the film also makes heavy use of camcorder footage, which is shown in a much lower quality than the rest of the film.  Though, in some ways, these shots are a little too low-quality, especially when projected on a large movie screen.

However, I do have to praise the film’s editing.  Since the film is so low-budget, the majority of the horror was achieved through the editing and sound design.  The film makes plenty of use of the the “Jacob’s Ladder Face Shaking Effect,” but there is also some more subtle effects, like changes in colour or a slight difference in frame-rate.  Also, the film has an effective synthesized score that helps greatly with generating tension for the film.

Overall, while it definitely was a little rough around the edges, I thought that Beneath was a very competent low-budget horror film that actually had some decent tension at times.