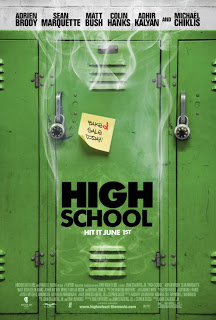 High School is a stoner comedy about two teenagers, who decide to get their entire high school stoned on pot brownies in order to mess up the results of a drug test set up by the very strict headmaster (played by a nearly unrecognizable Michael Chiklis).

The problem with many stoner comedies is that if you are not a marijuana smoker yourself, it can be hard to find humour in these types of movies.  Indeed, High School is filled with much “pot propaganda” in the early half and I found myself groaning, rather than laughing.

However, the element that attracted me to the film was Adrien Brody, who is playing against type as a crazed foul-mouthed drug dealer named Psycho Ed.  I am happy to say that he is probably the funniest character in the film and I enjoyed the film much better when he was on screen.

Also, I found that I enjoyed the stoner comedy a bit more in the latter half, especially when it involved the adult characters (Colin Hanks as the Assistant Headmaster was particularly funny).