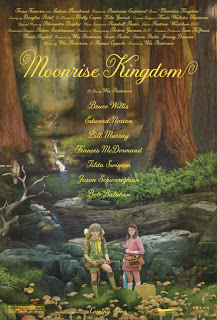 For better or worse, Moonrise Kingdom is probably the best film Wes Anderson has made.  He’s turned himself into quite an auteur over the years creating films that have a very distinct visual style.

Moonrise Kingdom looks and feels like it was made in the 1960s setting of the film.  The film is a coming of age story about two kids on an island, who decide to run away together.  This one event sends the entire island into chaos as everyone tries to locate the kids.

I was quite impressed by the two lead child actors, especially since it is the first film role for both.  Of the adult actors, the standout is definitely Edward Norton, who plays something of a big kid in his role as the leader of a scout troop.  Bruce Willis is also quite good as the police officer, who leads the hunt for the kids.

Overall, I quite enjoyed the film.  I would have given it a perfect mark, but I had to bring it down a notch for one scene of (unnecessary) animal violence that bothered me.  Still a good film.