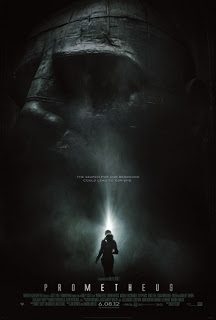 Ridley Scott’s return to science fiction in 30 years began as a sort of prequel to Alien that expanded the backstory of the origins of the mysterious ship where the alien creatures were originally found.

Indeed those prequel elements are still very much present within Prometheus.  However, it seems that Scott decided all but severe the film’s connection to Alien, minus some homages, and presented Prometheus as a stand-alone story.  As such, I feel that Prometheus is best viewed as its own science fiction film, rather than something that is meant to connect with a film that was made over 30 years ago.

I definitely quite enjoyed film.  The best character is undoubtedly Michael Fassbender as the android David.  Fassbender is great playing a character that is not quite human and many of his best moments come from the beginning when he is just wandering around the ship, going through his routines.

While I fear that others will unfairly compare her to Ripley from the Alien films, I feel that Noomi Rapace was very competent in the lead role of Elizabeth Shaw.  Her performance is even more impressive when you consider the fact that this is only the second English-language role for the Swedish actress.  I’m sure we will see more of her in the years to come.  Other standouts in the cast includes Charlize Theron as corporate representative Vickers and Idris Elba as the easy-going captain Janek.  Guy Pearce also appears in the film, though you almost wouldn’t know it, since he is buried under layers of old-age make-up.

Overall, I’m happy with the film that Prometheus turned out to be.