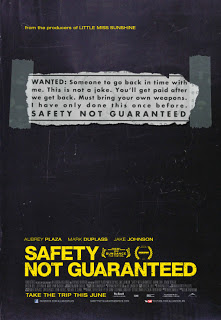 Safety Not Guaranteed can be seen as a further example of how the Mumblecore independent film movement, namely those that involve the Duplass brothers, have been steadily moving into the mainstream (the Duplass’ have come a long way since The Puffy Chair).

Produced by the Duplass Brothers, and co-starring Mark Duplass, Safety Not Guaranteed tells the story of a magazine writer (Jake M. Johnson), who sends his intern (Aubrey Plaza) to befriend a man (Duplass), who claims that he can go back in time.

This was more definitely a charming little film.  Plaza and Duplass had good chemistry with each other (even though I found their noticeable age difference to be a little weird in the more romantic moments between the two).  The film is tied together with both an unexpected cameo and one hell of a great ending.

Definitely worth checking out.