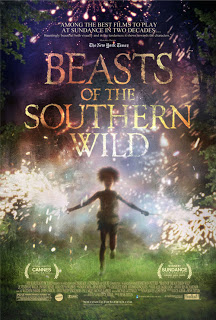 Beasts of the Southern Wild focuses on a young girl named Hushpuppy, who lives in a perpetually flooded area of the southern United States nicknamed The Bathtub.  She lives with her father Wink and together they must cope with the changing world.

The film is told entirely from Hushpuppy’s perspective.  As such, the film is just as much a fantasy, as it is a drama.  There are actually literal “beasts” in the film, in the form of these large boar/ox hybrids called aurochs, which may or may not be a figment of Hushpuppy’s imagination.

Overall, I have to say that I quite enjoyed the film.  A small issue I have is that changes tone in the third act and loses some of the fantasy aspect to become more dramatic.  That said, the film ties together in a satisfying way by the end.