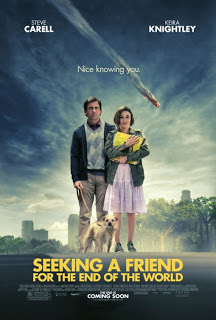 This film has a very simple story – the end of the world is imminent and two strangers go on a roadtrip to reunite with their loved ones before the Apocalypse.

The apocalypse is not something that immediately comes to mind when you are creating the plot for a romantic comedy.  Indeed, the film retains a dark overtone throughout and at times is just as much a drama as it is a comedy.  In fact, I would probably say that the most poignant moment of the film happens when the film is at its darkest.

The film is built entirely around the performances of Steve Carell and Keira Knightley.  Carell give a much more subdued performance than he is usually known for, which helps with the drama of the film.  Knightley, on the otherhand, is very much a free spirit and I don’t think she has ever been better in a film.

The film doesn’t dominate itself too much with the doom and gloom aspect of the Apocalypse and instead focuses more on the growing connection between Carrell and Knightley’s characters as they make an Odyssey-like journey across the United States.

I thought that this was an excellent film and it’s a shame that not many people ventured out to see this hidden wonder.