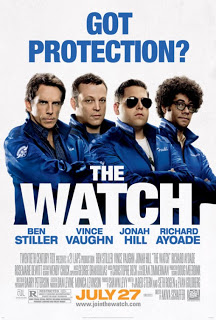 If there is a word I could use to describe The Watch it would be “uneven.”

If you take Old School, 21 Jump Street, The I.T. Crowd, and Attack the Block and mash them all together, you might come up with something that looks like this film.  The film is advertised as a sci-fi comedy, though this sci-fi element isn’t really introduced until the second half.  Before then it’s just Ben Stiller, Vince Vaughn, Jonah Hill, and Richard Ayoade putting on blue jackets and acting like complete jerks.
I thought that the film picks up when the sci-fi element comes to the forefront, though that’s not until the third act.  Overall, it was just a so-so film.