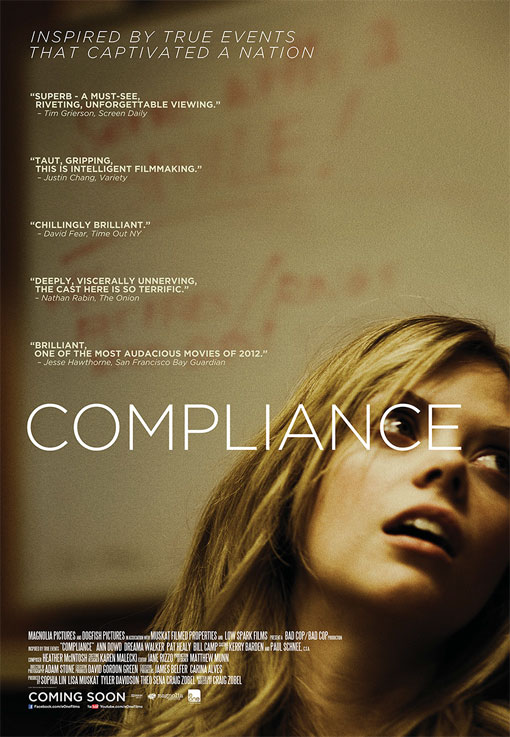 If someone called you claiming to be a police officer, would you obey everything he tells you to do with no questions asked?

Compliance is the extremely controversial film that debuted at Sundance and is inspired by a series of true events.

In the film, a manager of a fast food restaurant named Sandra (Ann Dowd) receives a call from a man claiming to be a police officer. The caller claims that he has received a report saying that, one of Sandra’s employees, Becky (Dreama Walker) has stolen money from a customer.  Sandra brings Becky into her office for questioning and is eventually asked by the caller to perform a strip search on her.  It only gets worse from there.

Compliance is an extremely disturbing film and it’s hard to watch Sandra blindly believe the caller just because he repeatedly states that he is a police officer.  It’s even more disturbing when other individuals are brought into the mix and, while some don’t want anything to do with the situation, others are even more compliant.

A theme that’s explored greatly with this film is the fact that we are conditioned as a society to obey people in positions of authority.  Even Becky was compliant at first because it was her boss that was telling her to do the degrading acts.  Despite how disturbing it is to watch, this one of those films that you can watch and analyze from a sociological standpoint.

I will guarantee that not everyone will like or even be able to sit through Compliance.  One the main controversies over the film at Sundance involved a number of the people in the audience walking out of the film.  While there was no walkouts at the screening I attended at the Bell Lightbox, I was squirming in my seat for the bulk of the film’s running time.

Overall, I thought that Compliance was an excellent character study, however I would highly advise that you watch it at your own risk.