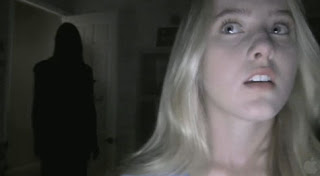 That’s right folks! They are continuing to churn out sequels to the Paranormal Activity films and the trailer has just surfaced for the fourth entry in the series.  I have plenty to say on this trailer.

I still the first Paranormal Activity to be a quite terrifying film.  However, it resulted in two things.  The first thing it did was turn “found footage” into a full subgenre that is no longer limited to just horror films.  In some ways, we are not getting too many of these types of films, which limits the overall effect.

I would have been happy if they left the series as a trilogy, but of course they have to keep making money on this series.  The fourth film looks to be once again the same plot, different scenario.  While I thought the VHS format of the third was clever, they doesn’t really seem to be anything to differentiate this fourth entry (other than maybe the use of Skype, which was more cleverly used in a segment of V/H/S).

This film is once again a sequel (as opposed to the previous film being a prequel) and it seems to have some call-backs to The Omen, in the form of a creepy demonic child.

When are the studios going to realize that the only reason I liked Paranormal Activity in the first place was because it was so original?  That originality is long gone and may seriously consider skipping this fourth entry.