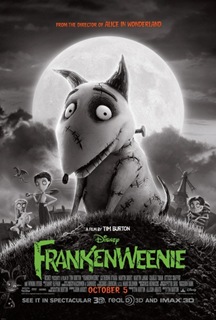 Frankenweenie began life as a half hour short film made towards the beginning of Tim Burton’s career in 1984. 28 years later, Burton has expanded Frankenweenie into a feature length, black and white, stop-motion film, which is essentially Burton’s homage to classic horror films.

The film, which is directly inspired by Frankenstein, sees a boy named Victor attempt to resurrect his recently deceased dog Sparky. The successful resurrection results in a chain reaction, which eventually results in other resurrected pets, each inspired by a different type of monster.

I thought that this was an immensely enjoyable film that sees Tim Burton go back to his roots in a big way. In some ways, this is probably the best film Burton has made in years.  The film also greatly demonstrated Burton’s love of classic horror films to the point that there is even a (live action) clip of of 1958 Hammer version of Dracula at one point in the film. I should also add that the film was not afraid to get dark when it had to and might be a bit scary and/or upsetting to very young children.

Overall, I found Frankenweenie a joy to watch and the film is worth it for the monsterrific climax alone.