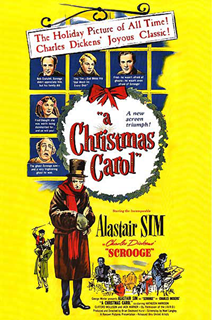 Merry Christmas!  Since the timing is right, I thought that I would make my final film of this year’s blindspot series a holiday film.  I’ve seen many adaptations of Charles Dickens’ A Christmas Carol over the years.  However, I am ashamed to say that I never before saw the 1951 film Scrooge, which starred Alastair Sim as, who many consider to be, the definitive film version of Ebenezer Scrooge. After seeing the film, I do have to say that Sim’s performance is the main highlight here.  Everything from facial expressions to vocal mannerisms makes him the perfect embodiment of Scrooge.  In fact, when I was watching this film, I thought back to the recent 2009 adaptaion of the story, starring a motion captured Jim Carrey as Scrooge.  Watching Alastair Sim’s performance in this film made me realize that it was likely the direct inspiration for Carrey’s performance in the recent film.  It definitely speaks volumes for Sim’s performance if he ends up influencing other people’s interpretations of the character. Charles Dickens original novella is a rather quick read (I once read the book on Christmas Eve in one sitting), however it’s definitely amazing how different each adaptation of A Christmas Carol is.  While there are important story elements that remain the same in each version, there are elements of the story that appear in one version and are absent from others.  In the case of Scrooge, I thought it had the longest “Ghost of Christmas Past” segment out of all the previous adaptations I’ve watched.  In fact, this section of the film seemed to take up nearly a full half hour.  This of course resulted is some compression of “Ghost of Christmas Present” and “Ghost of Christmas Yet to Come” segments.  However, it didn’t really hurt the film as a whole. I also have to note that the scene in the Cratchit house is probably one of the most joyous depictions of a family Christmas I have ever seen.  You have to laugh when you have kids very excited about going to see the Christmas Pudding (as well as drinking Gin Punch).  This sequence definitely brought a smile to my face. Overall, while there are probably other adaptations of A Christmas Carol I like a bit better than Scrooge (I have a soft spot for Muppets), the film is definitely worth seeing for Alastair Sim’s excellent performance (especially during the Christmas morning sequence at the end). 9 | REALLY LIKED IT