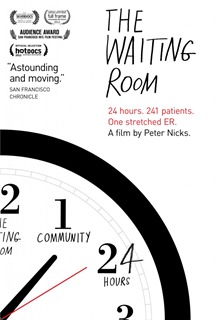 The Waiting Room is a cinéma vérité-style documentary about a public hospital in California.  The film just shows the activity at the hospital over the course of the day.  The only real narration comes in the form of voiceovers from the staff and patients. At the very least, the film is an interesting look at the very poor state of the healthcare system in the United States.  Many of the patients featured were refused care elsewhere because they did not have health insurance.  However, the hospital is also overcrowded and can’t really find the space for everyone, so many are left waiting in the waiting room for hours (or days). Other than being a mostly objective look at a routine day at this hospital, there really isn’t all that much to The Waiting Room.  However, it was still an interesting watch.7 | FAIR