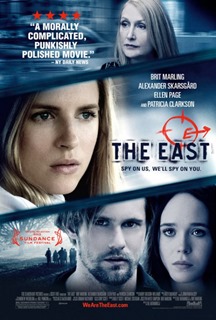 Writer/actress Brit Marling (Another Earth, Sound of My Voice) reteams with Sound of My Voice writer/director Zal Batmanglij for the thriller The East.  The film stars Marling as Sarah, who is an operative for an elite private intelligence firm.  Sarah is sent undercover to infiltrate an eco-terrorist organization named The East, who use an “eye for an eye” mantra to pay corporations back for the pain they cause others.  After Sarah infiltrates The East, she becomes acquainted with the members, including their leader Benji (Alexander Skarsgård) and the confrontational Izzy (Ellen Page).  While working undercover, Sarah begins to sympathize with The East’s cause and she begins to question where her loyalty truly lies. While watching The East, I couldn’t help but notice some mild plot similarities between this film and Sound of My Voice, with The East substituting for the cult of the previous film.  However, despite those small similarities, I thought that The East was original enough to stand on its own.  The marketing of the film makes The East look much more like a generic Hollywood thriller than it turns out to be.  While there are still a couple set pieces in the film, which has The East pulling off their terrorist acts, much of the film is spent developing the characters, all of whom experience growth over the course of the film.  It’s probably no coincidence that Benji looks very much like Jesus when he is first introduced and he tends to be very successful in recruiting others to his cause.  Despite having a, somewhat oblivious, live-in boyfriend, Sarah finds herself attracted to Benji, which adds to her confusion over which side is the “good” side.  While Ellen Page’s Izzy starts off as a somewhat antagonistic character, it revealed that there is much more to the character than meets the eye.  Also, even though she only has a brief role in the film, Patricia Clackson is excellent as Sarah’s boss Sharon, who seems a little more occupied in helping out her paying clients than actually doing anything to stop The East’s activities. It would’ve been very easy for The East to fall into the clichés of the thriller genre.  Instead, the film uses an approach that is much more grounded in reality than the typical Hollywood blockbuster.  When it comes down to it, there are no real heroes and villains in The East, just people with different points of view.  Even though The East uses extreme methods to spread their message, Sarah slowly comes to realize that perhaps they have a point in committing their so-called terrorist attacks. Overall, I thought that The East was an enjoyable and more grounded thriller, which focused much more on character development than big action sequences.8 | LIKED IT