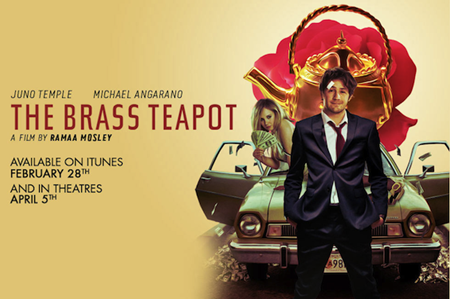 Last year saw the beginning of a change in the release model for certain independent films, in which the distributors would initially release the film on VOD, a month or so before giving the film a limited theatrical release.  VOD (or Video On Demand) is a catch-all phrase for various methods of online distribution, ranging from special Pay-Per-View channels offered by your cable company to downloading the film off iTunes.  VOD, which uses a pay-to-play model, tends to be one step above a subscription service like Netflix, in how it offers a selection of more recent titles. This move to a “VOD first” distribution model for independent films is obviously a sign of the times.  Many of these films have just come off of film festival runs and are lucky that they are receiving distribution of any kind.  Independent films typically don’t get a large theatrical release (often no more than a couple screens in a city), which often tend to be sparsely attended.  As such, it can be assumed that releasing a film on VOD first would build an audience for the film and that word of mouth would help the film during its theatrical release. However, this is not often the case.  I consider myself to be a hardcore cinephile that prefers seeing films in a cinema.  However, most of the general public prefer the convenience of watching film at home.  There are sure to be many people who prefer the VOD distribution model and will opt to watch the film at home, without even bothering with the theatrical release. There is also the issue of how wide the theatrical release of the film is.  Earlier this year, I was quite interested in seeing the film The Brass Teapot, which I missed when it played at last year’s Toronto International Film Festival.  Even though the film was released on VOD on February 28, I opted to wait for the film’s promised theatrical release on April 5.  However, that release date came and went and the film has yet to see theatrical distribution in Toronto, which is quite ironic, considering how the film played at last year’s festival.  I try to remain optimistic that the film will see eventually surface theatrically in Toronto, however since two months have now passed since that April 5 release date, I should assume that I should probably just settle for the VOD method (or wait until the film pops up on Netflix). Another film that I hope to see theatrically is the horror anthology V/H/S/2.  The film was released on VOD last week and has a theatrical release set for July 12.  However, like The Brass Teapot, I can’t guarantee if the film is going to show up theatrically in Toronto.  It actually seems that independent horror films are the most common type of film to be released on VOD before theatres.  Films like The Innkeepers, V/H/S, The ABCs of Death, and Aftershock all were released on VOD before theatres, sometimes as much as three months before.  In fact, it seems like the only way to guarantee seeing these films theatrical is catch them at a festival screening (which is how I saw all four of the above films). I expect that this habit of releasing films on VOD before theatres will become a much more regular occurrence, at least when it comes to independent films.  Of course, I’m sure that studios would eventually want to try this with more mainstream films, though I’m sure that the results would be catastrophic for cinema owners.  Overall attendance at movie theatres are already quite low and giving people the option to skip the theatre and just watch the film at home will make that number quite worse.  Here’s hoping the traditional method of seeing movies the way they were meant to be seen – on a big screen – would persevere throughout all these changes to film distribution.