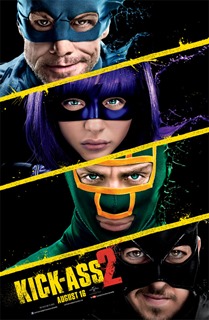 The teenager who decided to become as superhero is back in Kick-Ass 2.  Two years have passed since the events of the first film and Dave Lizewski (Aaron Taylor-Johnson) has vowed to retire his alterego of Kick-Ass, especially since others have now started hitting the streets as superheroes.  However, Dave quickly becomes bored of the the civilian life and attempts to form a team with Mindy Macready aka Hit-Girl (Chloë Grace Moretz).  However, Mindy is forced to retire by her guardian Marcus (Morris Chestnut) and attempts to live a life as a normal teenager.  As a result, Kick-Ass instead decides to join a newly formed team of superheroes called “Justice Forever,” which is lead by Colonel Stars and Stripes (Jim Carrey).  In the meantime, the former Red Mist, Chris D’Amico (Christopher Mintz-Plasse) wants revenge against Kick-Ass and decides to form an army of super villains. Based on the comic series by Mark Miller, I thought that the original Kick-Ass was a fun satire about what might happen if an average teenager just decided to become a superhero, for no other reason other than thinking it would be cool.  There was nothing particularly keep about the first film and its most memorable aspect was the fact that it featured an 11 year old superhero named Hit-Girl, who had a very potty mouth and a proficiency for extreme violence.  It was not a film meant to be taken seriously and it was quite fun to watch. In my opinion, the biggest fault of Kick-Ass 2 is that it starts to take the whole superhero plot a lot more seriously, while also trying to remain a satire.  The stakes are a lot higher this time, with a lot of focus on the consequences of trying to be a superhero in the real world, and I just didn’t find the action as fun this time around.  It probably didn’t help that the most fun aspect of the first film, Chloë Moretz’s Hit-Girl, sits on the sidelines for much of the film, as she tries to live a normal life. Chloë Moretz is actually much older now than she was when she filmed the original Kick-Ass, so the film had to retcon the plot a bit to establish Mindy/Hit-Girl as now being 15 years old, despite the fact that her character was 11 in the original film and should’ve been only 13 in the time frame of this film.  As a teenager, Hit-Girl no longer has the same shock value and is merely just one of the lead characters this time around.  I also have to say that her subplot of having to adapt to a normal life in high school features some of the most cringe-worthy moments of the film, as she has to cope with super-clichéd ultra-sexed-up popular kids.  There is also a gross-out sight gag that just had me shaking my head afterwards. By far the most memorable aspect of the film is Jim Carrey as Colonel Stars and Stripes.  Like Nicolas Cage in the first film, this is another case of obvious stunt casting, however it is clear that Carrey was having a ball with the role.  Since he’s by far the best aspect of the film, it’s a shame Carrey had a bit of a change of heart over the film’s violent content and he decided with withdraw his support in the weeks leading up to the release. The less that is said about Christopher Mintz-Plasse as Chris D’Amico aka The Motherf%&$er, the better.  While the man, formerly known as McLovin, was passable as Red Mist in the first film, he will probably go down as the worst super-villain ever.  That’s probably the point, however it’s hard to take someone who wears leather bondage gear as a costume seriously as a primary antagonist.  In fact, its the henchwoman Mother Russia who steals the show when it comes to despicable villains. Even though I have been quite critical of Kick-Ass 2 throughout this review, I will still say that I thought it had its moments.  I will once again mention Jim Carrey’s performance and I also dug the climatic battle at the end of the film.  That said, when it is all said and done, Kick Ass 2 is still as lesser film than the original and it is just not as fun.7 | FAIR