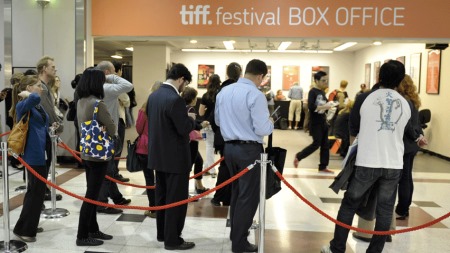 We are only a week away from the 2013 edition of the Toronto International Film Festival!  The film announcements have been long since finalized and the only thing left to do is to secure tickets the festival screenings.  The best way to do this would’ve been to to pick up one of the many ticket packages TIFF had on sale, which would’ve allowed you to see multiple films for much less than the price of single tickets.  While it’s now too late to take advantage of TIFF’s ticket packages, it’s still possible to get single tickets, which go on sale September 1.  This is the method that I use and I have refined my process over a decade of attending TIFF.  As such, I thought that I would give some tips to help save you from disappointment when you arrive at the box office. Plan, Plan, and Plan Some More The biggest mistake I made when I attended my first TIFF back in 2003 is that I only came prepared with two film screenings, both of which were off-sale when I arrived at the box office.  As a result, I make sure to have as many film choices as possible prepared when I go to buy tickets.  Always make sure to have at least one alternate choice for every film screening you want to attend (I actually choose up to four alternate choices).  Also there’s a few forums online (such as this one), which keep track of which films have gone off-sale (definitely a good fact to know). Since it can be a daunting task the choose films, there are many tools you can use to help.  The best tool from the last few years is a website called TIFFR, which allows you to add TIFF films to a shortlist and plot them to your own personal schedule.  It has definitely been a major help for me.  You should also make sure to have a copy of the Official Film Schedule and reference the TIFF website and/or programme guide for film descriptions. Budget for Screenings The price of a single tickets this year (for an adult) is $23.50 for regular screenings and $45 for premium screenings (i.e. high profile premieres).  As such, you should make sure to choose enough films that meet your budget.  The best method of payment would be cash, debit, or VISA (though for the last few years, other credit cards have been accepted). If you are a member of TIFF’s volunteer programme, you will get a voucher for every shift you complete.  These can be redeemed at the box office for advance tickets to regular screenings, as well as select premium screenings on a RUSH basis.  It definitely helps for more cash-strapped individuals. Buy Tickets as Early as Possible The Festival Box Office at 225 King Street West opens for single ticket sale at 9am on September 1.  It has become the habit of hardcore cinephiles to actually camp out the night before, in order to acquire the best tickets.  While camping out isn’t really that necessary, it is highly recommended that you buy tickets as soon as you can, preferably on the first day of ticket sales.  Since the online ordering system can sometimes be unreliable on the first day, it is best to wake-up early and head to the box office in person (I recommend arriving AT LEAST an hour or two before tickets go on sale).  While you might find yourself in for a long wait (one year I waited 8 hours in line), you will likely be able to get tickets to most of the screenings you want to see (assuming you arrived well prepared). Off-sale does NOT mean “Sold Out” A big pet peeve of mine is when people describe a film at TIFF as being “sold out.”  The official terminology TIFF uses when tickets are no longer available is “off-sale.”  This is because many films tend to go back on sale for one reason or another.  That’s why TIFF asks you to check the the box office everyday at 7am, since that is when additional tickets might be available for purchase.  It is only on the day of the screening when the film is officially no longer available and marked “RUSH.” When in doubt, RUSH If there is a film that you ABSOLUTELY want to see, but you haven’t been able to get advanced tickets, there is always the RUSH line.  In it’s simplest description, the RUSH line is place where you wait on stand-by, in case last minute tickets become available.  Usually RUSH tickets are sold 10 minutes before a screening, after most of the ticket holders have been let in, and are CASH-ONLY.  There are people who have made waiting in the RUSH line an art, many of whom line-up HOURS before the screening.  Personally, I’m not too keep on lining up to MAYBE see a film, however if you are truly desperate to see a certain film, the RUSH line is definitely worth a shot.
Well, that wraps up my tips on getting tickets.  Good luck with making your TIFF selections.