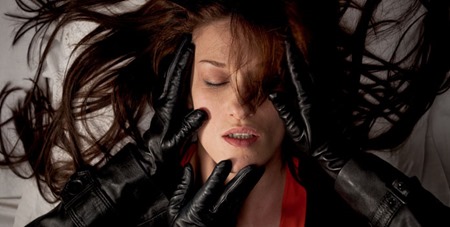 It is never a good thing when people decide to walk out of a screening, however it’s probably worse when these walkouts happen at a film festival screening. Since the filmmakers are nearly always present at these events, it must feel horrible to them to be witness to people walking out of their films. This is exactly what happened at a screening I attended of The Strange Colour of Your Body’s Tears, which is a French/Belgium film that is meant as a homage to the Italian giallo horror films of the 1970s (i.e. the films of Dario Argento). There are likely many reasons why people decided to walkout of the film. For instance, the film is a bit jarring in its aesthetic, with quick cuts, close-ups, and different shooting styles. The film also has a very loudly mixed sound design, in which every sound effect pierces into your soul. Then of course, there is the gory violence in the film, which is often shown in extreme close-up.  It is quite likely that some or all of those elements were responsible for the large number of people, including the person I was sitting with, progressively walking out throughout the course of the film. I’m personally not very bothered by the walkouts themselves. Even though I can say that I liked The Strange Colour of Your Body’s Tears, I will be the first to say that the film is not for everyone.  However, what does bother me, is hearing that the patrons walking out of the film angrily complained about the film to the volunteers outside the cinema. While there are probably people to blame for those patrons’ poor cinematic experience, those poor volunteers aren’t one of them. The question I have been asking myself since seeing the film is “did these patrons, who walked out of the film, know what they were getting into?”  There are many reasons why people may end up seeing a film completely blind at the festival.  Either it was part of the “TIFF Choice” ticket package, where the screenings are chosen by the programmers, or the screening was merely at a convenient time and location. I reread the description of The Strange Colour of Your Body’s Tears after returning home and I can say that it does properly warn readers of the film’s content, since it’s described as a “blood-soaked homage” with “jarring violence.” Also, the very fact that it was part of the Vanguard programme should have been enough to warn festival goers.  Programmed by Midnight Madness programmer Colin Geddes, Vanguard is designed as a companion programme, which features more serious and artsy genre films. Not all the films in Vanguard are as fun to watch as they are in Midnight Madness and some can be outright disturbing.  Even though I haven’t seen the film, I’ve heard some things about another Vanguard selection called PROXY, which is supposed to be particularly difficult to watch. I also suspect that some people may have gotten the wrong idea about the giallo aesthetic by watching last year’s Vanguard selection Berberian Sound Studio. That film starred Toby Jones as a sound designer for a giallo film, of which the disturbing contents are never seen, yet graphic described.  Some people might have gone to see The Strange Colour of Your Body’s Tears thinking that it was going to be another film like Berberian Sound Studio. Instead, they ended up essentially getting the film that Toby Jones’ character was doing the sound for. I definitely feel bad for, Strange Colour of Your Body’s Tears co-director, Bruno Forzani, who did the Q&A for the film to a near-empty theatre.  Not every film that plays at the Toronto International Film Festival is for everyone and it’s quite likely that there are times when you will come across a film that does not fit your tastes. All I ask is to just learn from your mistakes and try your hardest not to blame anyone, but yourself, for your decision to see this film.