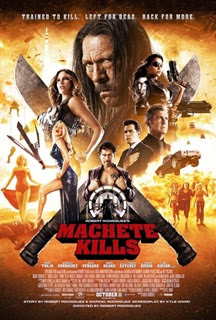 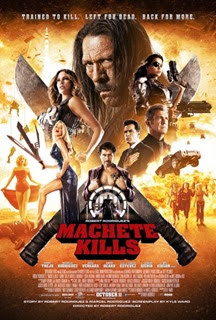 The man they call Machete (Danny Trejo) is back for a new mission. Recruited by the President (Carlos Estevez aka Charlie Sheen), Machete is asked to put a stop to a missile pointed towards Washington. Machete learns that the missile is part of a plan by crazed arms dealer Luther Voz (Mel Gibson), who wants to destroy civilization and create his own utopian society.  Machete won’t allow any of that, so he sets out to do what he does best – kill people.  Along the way, Machete encounters a crazy group of foes, including Mendez (Demian Bichir), a revolutionary with a split personality, El Camaleón (various actors), a master of disguise assassin, and Desdemona (Sofía Vergara), the crazed madame of a brothel of gun-wielding prostitutes (one of whom is played by, very grown up, former Spy Kid Alexa Vega). Machete also has help from his handler Miss San Antonio (Amber Heard) and Luz aka Shé (Michelle Rodriguez). Machete began as simply an entertaining faux trailer, which played before the Planet Terror segment of Grindhouse.  The trailer was so popular that Robert Rodriguez decided to expand it into a, quite entertaining, feature-length film.  While the original film had many ridiculous moments, it also tried its best to play things straight. Well, for the sequel Machete Kills, it seems like Rodriguez decided not to be serious at all and he has instead made a film that is almost like a parody of the original.  In many ways I would say that Machete Kills is not unlike, another over-the-top action sequel, Crank: High Voltage, in how it opts to just throw reality out the window and make the film as crazy as possible, which even incorporates some science fiction elements. While Machete Kills once again features over-the-top violence, Rodriguez has opted to go with CGI-generated gore effects, which looks really fake on screen.  I can only imagine what horror make-up master Tom Savini (who returns in the film as hitman Osiris Amanapur) thought of all the non-practical violence in the film.  I for one thought that it made the film less fun, since it took me out of the movie. I also have to argue that Rodriguez probably overdid it on the stunt casting, with nearly every character played by a recognizable face, including Lady Gaga, Antonio Banderas, Walt Goggins, Cuba Gooding Jr, Vanessa Hudgens, and William Sadler. Many of these actors are playing the single character of El Camaleón, who repeatedly changes his appearance, the most notable being Lady Gaga (who was obviously cast more for her looks than acting ability).  I will say that I enjoyed Mel Gibson’s performance in the film.  Despite his star-level lowering due to various controversies over the course of the last decade, Gibson was obviously having fun playing an over-the-top villain.  He probably saved the film from being a total write-off for me. I have the say that the most enjoyable sequence of Machete Kills came in the first five minutes, with a trailer for Machete Kills Again…in Space!  This trailer featured more grindhouse aesthetics than the whole entire rest of the film.  It could be argued that this was merely a faux trailer that was played as a joke, however Machete Kills ends with a very blatant set-up for this film, so hopefully we will someday see Machete kill people in space. Overall, I’m sad to say that I didn’t find Machete Kills to be as much fun as the first film.  Even though I did enjoy Mel Gibson’s performance in the film, it is quite obvious that this film is an example of too much of a good thing.  That said, I will probably go see the third film if it surfaces.6 | WATCHABLE