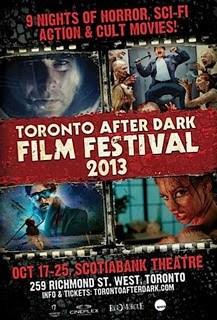 Well, the eighth annual edition of the Toronto After Dark Film Festival has come to an end.  It has been now been five years since I first attended Toronto After Dark back in 2009 and this was my second year doing full coverage.  To reference the title of one of the films that played this year, I was like a machine throughout the course of the week.  Every day consisted of a very busy schedule of writing reviews, editing together Q&A highlights, going to screenings and attending Pub After Dark.  It was definitely a very exhausting week for me. This was Toronto After Dark’s first year at the Scotiabank Theatre, moving from their longtime home at the Bloor Cinema.  Even though the festival was marred with a number of technical difficulties, which delayed the start of the festival on opening night and resulted in three mid-film stoppages, I would say that the move to the Soctiabank Theatre was an overall successful one.  Moving to a downtown location really helped to raise the profile of the festival, which was evidenced by the number of sold out screenings throughout the week, including both the opening and closing night galas.  I will look forward to seeing how Toronto After Dark builds upon its increased status next year. Now without further ado, here are my top five features and shorts. Top Five Feature Films

Honourable Mentions: C (299, 292 km per second), North Bay UPDATED (10/29) – Here are my photos from the film festival:
And that concludes my coverage of the 2013 Toronto After Dark Film Festival.  See you next year!