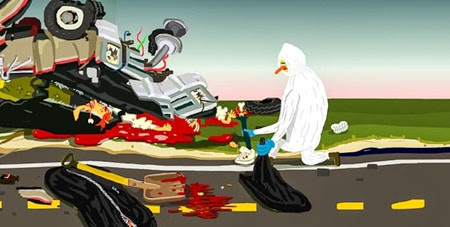 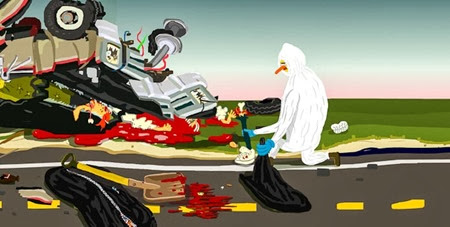 From visual artists Seth Scriver and Shayne Ehman, comes this very trippy and surreal road trip across Canada.  Based on a real cross-country trip by Scriver and Ehman, Asphalt Watches follows the duo of Bucktooth Cloud and Skeleton Hat as they travel cross-country, with the help of an out-dated train hopping manual.  While hitchhiking, the two of them get picked up my many weird individuals, which helps to make this a road trip to remember. Asphalt Watches is a film that really needs to be seen to be believed.  The film was animated using Flash over the course of seven years and it was a very interesting film to say the least.  Underneath the film’s very simple and episodic road trip plot, is a very trippy film filled with weird visuals and odd musical sequences.  In some ways, the episodic plot of Asphalt Watches, and the fact that it was animated in Flash, might have been better presented as an online web series than a feature film.  While there were definitely many awesome and impressive moments in the film, such as a very gory car crash visual, there were also moments when the film began to drag and the visual style got taxing.  As such, I was thinking that the film would’ve been more enjoyable in smaller doses. Of course, that isn’t to say that Asphalt Watches isn’t an achievement in its own right.  It is undoubtedly one of the more original films in the Canada’s Top Ten line-up and I am certain that the film has the very real chance of becoming a very trippy cult classic.  The film is also interesting in how the animation actually gets somewhat better as the film progresses, which includes starting off with a 4:3 aspect ratio and ending in wide screen.  Part of this can be attributed to the fact that the film was animated in chronological order, so Scriver and Ehman would simply improve as animators in the years it took to make the film. Overall, despite the crude Flash animation and episodic plot, there was a certain charm to Asphalt Watches.  With memorable characters, such as a foul-mouthed mother, crazed Santa, and talking hand, the film is almost certain to find an audience that will be attracted to its weird visuals and even weirder plot.  While I’ll admit that this film is not for everyone, I definitely found it to be a very interesting and trippy cinematic experience.8 | LIKED IT