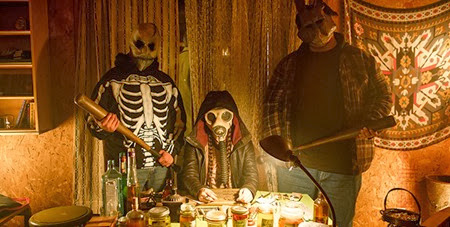 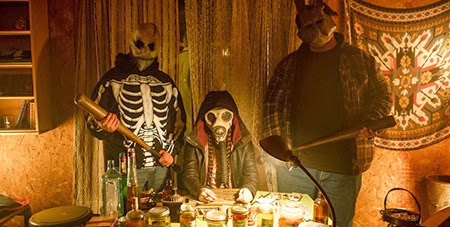 Set during a time in Canadian history when aboriginal kids were routinely sent to residential schools, Rhymes for Young Ghouls tells the story of a young girl named Aila (Kawennahere Devery Jacobs).  Aila’s life was shaken by tragedy at a very young age when her mother accidently ran over her younger brother, and subsequently committed suicide, leaving her father Jacob (Glen Gould) to take the fall for the death and go to prison for seven years.  By the time Jacob is released, a now 15 year old Aida has taken over the family’s drug trade, which is not the future Jacob wanted for his daughter.  Meanwhile, Aida and Jacob’s reservation is being controlled by the sadistic Indian agent Popper (Mark Antony Krupa), who has a long history with Jacob.  Sick of the constant obsession brought on against her people, Aida decides to gather fellow youth and break into the local residential school to enact vengeance on Popper and steal back the money he stole from the reservation. The oppression of First Nation’s people dates all the way back to the first settlers arriving to North America from Europe and has always been a black mark in the history books.  I have to admit that before seeing Rhymes for Young Ghouls, I was not all that familiar with the Canadian Indian residential school system, which seemed to be a very dark period for First Nation’s people in Canada, since kids were required to attend these schools, which separated them from their families and native language, while also being subjected to physical and sexual abuse at the hands of the staff and other students.  I do have to say that the film does not portray Caucasians in a very positive light and the character of Popper is a particularly despicable villain, who has no redeeming qualities whatsoever. Rhymes for Young Ghouls takes these themes of aboriginal oppression and turns it into something akin to a highly stylized “fight back against the man” revenge film.  The film does not flinch at all with its bloody violence and it can be quite disturbing to watch at times, especially when Popper and his men are performing savage beatings.  However, in addition to being a genre film, Rhymes for Young Ghouls has many dramatic moments involving the direction Aila has taken with her life.  She routinely has visions of the spirits of her dead mother and brother and she attempts to reconnect with her father Jacob, who is not at all happy that his daughter had followed him down the path of being the reservation’s main pot dealer.  By the end of the film, Aida’s future is left somewhat ambiguous, but it is obvious that she experiences quite a lot of growth during the events of the film. Despite the fact that it was quite disturbing at times, I have to say that I found Rhymes for Young Ghouls to be one of the main highlights of this year’s Canada’s Top Ten line-up.  Through its highly stylized revenge plot, the film really opens your eyes up to what it was like at the height of aboriginal obsession and it makes me really hope that we have grown as a country since then.8 | LIKED IT