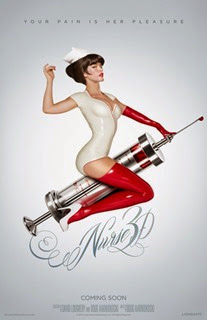 Playing as part of this month’s Rue Morgue CineMacabre screening series was this very campy and seductive horror film.  During the day, Abby Russell (Paz de la Huerta) is one of the best nurses at All Saints Memorial Hospital.  However, during the night, Abby goes on the prowl to seduce and kill adulterous men.  Abby is mentoring a rookie nurse named Danni (Katrina Bowden) and the two start becoming close friends.  However, when Abby begins getting a little too close for comfort, Danni begins to back off.  Not one to easily accept rejection, Danni quickly becomes the target of Abby’s wrath. One only needs to look at the pin-up style marketing materials to get an idea what Nurse 3D is all about.  Paz de la Huerta (Boardwalk Empire, Enter the Void) has become quite the sex symbol over the past five years or so and Nurse 3D is all about exploiting that status.  The story is told from Abby’s perspective and there is a certain dark humour about how she interprets the events around her.  The film also features quite a lot of gratuitous nudity by de la Huerta, including a somewhat weird sequence that has Abby performing a murder wearing ONLY a bra. While Nurse 3D is told from Abby’s point of view, she is still very much the antagonist of the film.  The actual protagonist of the film is Danni, who slowly starts to discover Abby’s murderous ways.  Other than Abby, Danni and her boyfriend Steve (Corbin Bleu) are probably the only other well-developed characters in the film.  Other than that, the film features Judd Nelson as the pervy Dr. Morris, a brief cameo by Kathleen Turner as the head nurse, and a few stereotypical supporting characters not worth mentioning.  More than anything else, I believe the film is really trying to get you to sympathize with Abby, despite her being the villain, which does end up giving the more virtuous characters the short shift. Now, I guess I should talk a bit about how Nurse 3D works as a 3D horror film.  The film does indeed feature quite a few pop-out effects, though most of them don’t happen until the film’s climax.  While the 3D does work in the few set-pieces it’s utilized, I admit to not really noticing it during the more “normal” scenes of the film.  The film also features Abby performing many gory murders over the course of the film.  While many of her victims are supposedly people who are adulterous and “deserve to die,” there is a point when Abby crosses the line and things get truly horrific. While Nurse 3D is probably NOT a film that feminists would enjoy, it still ended up being a campy, gory, and overall OK enough exploitative horror film.7 | FAIR