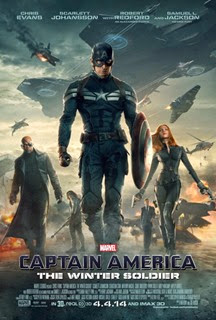 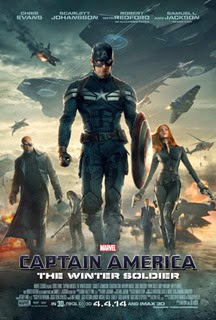 In his second solo film adventure, Steve Rogers (Chris Evans), better known as Captain America, is still trying to get used to life in the modern world, after spending 70 years in suspended animation.  Rogers has remained a part of the espionage agency S.H.I.E.L.D., doing missions with Natasha Romanoff (Scarlett Johansson), aka The Black Widow, under the orders of Nick Fury (Samuel L. Jackson).  A sequence of events leads to Rogers and Romanoff on the run, while pursued by a mysterious assassin known as The Winter Soldier (Sebastian Stan), who has ties to Captain America’s past.  Meanwhile, Alexander Pierce (Robert Redford), a senior leader within S.H.I.E.L.D. and member of the World Security Council, is preparing to launch three Helicarriers, which are designed to preemptively eliminate threats. One pattern I’ve noticed during Phase 2 of the Marvel Cinematic Universe is that it seems to be hard getting back to solo adventures for these Marvel superheroes, after the whole team was brought together for The Avengers; I had a couple issues with the plot developments of Iron Man 3, which brought my opinion down a notch, and Thor: The Dark World was merely OK.  With Captain America: The Winter Soldier being, more or less, the film that sets up next year’s Avengers: Age of Ultron, it is probably the film from Phase 2 that fairs the best.  I definitely found myself entertained about the film, even though it was still hard for this film to really stand out for me, among all the other Marvel films out there (in fact, this summer’s Guardians of the Galaxy will probably end up being the most stand-outish film of Phase 2). It is hard for me to talk too in-depth out Captain America: The Winter Soldier without giving away some big game-changing revelations made in the film.  Without saying too much, let’s just say that a certain organisation makes its return in a big way.  The development is so big, that it was even addressed on this week’s episode of the spin-off television series Agents of S.H.E.I.L.D., which I admit to having watched before the film, which probably made these revelations somewhat less impactful.  Also, if you aren’t familiar with the Captain America mythology, the true identity of The Winter Soldier might come a surprise, even though the revelation is telegraphed early on. While it’s hard for the film to truly stand on its own, outside of the multi-film arc of the Marvel Cinematic Universe, I can say that I was entertained while watching Captain America: The Winter Soldier.  Out of all the Phase 2 films, this likely the film that ties in the closest with Avengers: Age of Ultron and it will be interesting to see how the story pays off next year.8 | LIKED IT