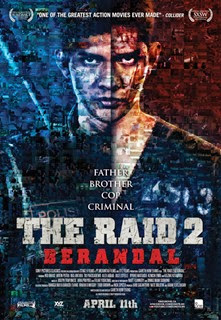 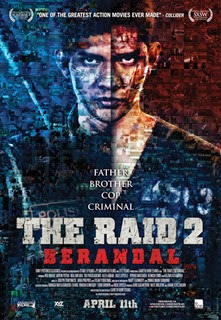 Director Gareth Evans returns with the sequel to his high octane Indonesian martial arts action film The Raid.  Mere hours after surviving the raid of the tenement building, Rama (Iko Uwais) is recruited into Jakarta’s anti-corruption task force to go undercover into one of the city’s largest crime syndicates and uncover the corruption in the police force.  Sent to jail as part of his cover, Rama (going under the name of Yuda) befriends Uco (Arifin Putra), the son of crime boss Bangun (Tio Pakusadewo), who Rama begins working for upon his release.  However, it turns out that the syndicate is in a power-struggle with a Japanese crime family and a gangster named Bejo (Alex Abbad), with Rama finding himself right in the middle of the chaos. It is interesting reading the backstory of The Raid 2: Berandal, which was actually written prior to The Raid, but shelved due to insufficient funds.  At some point, Gareth Evans decided to connect The Raid to his Berandal script, making the latter the film’s sequel.  It is quite obvious that The Raid 2 is a much more ambitious film than the previous, progressing from a simple story about a police raid on a tenement building to a full on mafia crime saga.  There are a lot more dialogue scenes in this film than the previous, which consequentially resulted in the film being much slower paced, with a total running time of 150 minutes. Probably the biggest issue with the slower pacing of The Raid 2 is that you often find yourself waiting for the next action scene.  Without a doubt, the biggest selling point of The Raid was its highly choreographed (and extremely violent) silat martial arts fights.  That’s why it was a bit of a slog having to wait until the film got through a bunch of story development, before it moved on to the next action scene.  That said, the final forty minutes or so of the film was an absolute blast to watch.  Beginning with a very impressive sequence that combined martial arts fighting with a car chase, the film moves into non-stop action for practically the entire third act of the film, including an intense final fight, which really tops the first film in terms of action and violence.  All together the film had some literally bone-crunching moves, which caused me to cringe on more than one occasion.  Also, I’m sure that the brother/sister assassins of “Hammer Girl” and “Baseball Bat Man” are destined to become cult figures, with their unique methods of fighting battles. While I can probably say I liked the simple action-packed premise of the first film better, The Raid 2: Berandal is a much more ambitious sequel, which is well worth watching for the non-stop action of the final act alone.8 | LIKED IT