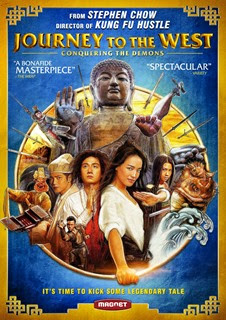 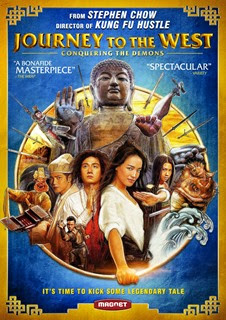 Now out on DVD and Blu-Ray is Stephen Chow’s Journey to the West.  Inspired by the Chinese literary classic, the film tells the story of Xuan Zang (Zhang Wen), a Buddhist monk learning to become a demon hunter. Unlike other demon hunters, who set out to destroy demons, Xuan Zang is instructed by his master to use a book of nursery rhymes to coax the goodness out of the demons. When a certain demon becomes particularly difficult for either Xuan Zang or, extremely skilled fellow hunter, Miss Duan (Qi Shu) to defeat, Xuan Zang is instructed to seek the assistance of, the imprisoned Monkey King, Sun Wukong (Bo Huang). However, he is warned that the Monkey King is an extremely evil trickster and must be tamed, using the methods Xuan Zang has been taught.

In my original review for Journey to the West, I mentioned how this film would be enjoyed by fans of Stephen Chow’s 2004 hit Kung Fu Hustle.  While I’m not sure how close the film stick to the original novel, it is obvious that Journey to the West, which has the subtitle Conquering the Demons, is meant as the first part of a film series.  However, the film still comes off as a complete story, with a satisfying resolution, and is notable for its effects-heavy battle scenes and comedic moments. The blu-ray for film features the following six behind-the-scenes featurettes: Stunts (1:41), Cast & Characters (2:24), Director Stephen Chow (2:39), The Laughs (2:20), Production Design (1:20), and Choreography (1:45).  These features are an interesting peak behind-the-scenes of the film, which shows that there were just as many practical effects and wire work, in addition to the CGI and blue screen.  My main criticism with these features is that, at a combined length of 12:12, they don’t go as in-depth into the making of the film as I would have liked.  The blu-ray also features the film’s trailer, language tracks in English or Mandarin, and subtitles in English, English SDH, French, or Spanish. Despite the blu-ray presentation being somewhat bareboned, Journey to the West is still worth checking out. Film Rating: 8 | LIKED IT
Blu-Ray Rating: 7 | FAIR  Purchase from Amazon (Canada):
Blu-Ray
Standard DVD Purchase from Amazon (US):
Blu-Ray Video on Demand:
iTunes (Canada)
iTunes (US)
Amazon Instant Video (US)