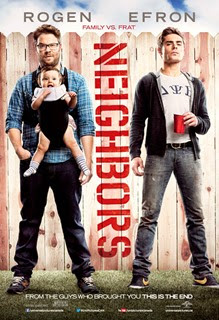 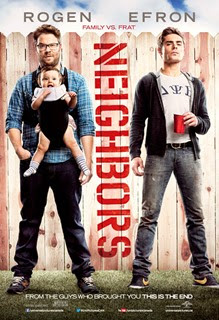 From director Nicholas Stoller (Forgetting Sarah Marshall), comes this comedy about new parents facing off against a fraternity that moves in next door.  Mac (Seth Rogen) and Kelly (Rose Byrne) are a married couple, who are still learning to get used to a domesticated lifestyle with their new baby daughter.  To their surprise, the vacant house next door is taken up by the Delta Psi fraternity, headed up by Teddy (Zac Efron) and his vice president Pete (Dave Franco).  Mac and Kelly initially try to co-exist with Delta Psi, with Teddy promising to keep the noise down.  However, when this quickly turns out not to be the case, Mac and Kelly begin a bitter feud with Teddy and they set out to find a way to get this fraternity to move out of their neighbourhood. It’s been nearly a decade now since Seth Rogen first gained notice, in his standout supporting role in 2005’s The 40 Year Old Virgin.  Ironically, in that film, the then 23 year old Rogen was playing a character roughly the same age he is now.  Having become known for playing loveable stoner characters, Neighbors marks the first film for Rogen, which has him playing an “old man,” who is finding it a bit difficult to escape his juvenile ways, as he enters the adult world of parenthood.  As someone a mere five days older than Rogen, this film really got me thinking about how old I am now, especially when it comes to being part of the core demographic for the types of comedies that Seth Rogen has become famous for starring in. I would probably be all for a mature comedy about Seth Rogen and Rose Byrne playing new parents, who are not quite ready for the task.  Much of the stuff that I found funny in Neighbors came this premise, particularly their huge overreaction to a discovery their baby makes on the lawn.  I think the only time this “new parent” premise didn’t really work for me was a certain gross-out gag involving Rose Bryne, though she should be given credit for agreeing to do such a scene. The aspect of Neighbors that I did not connect with at all was everything to do with the fraternity.  Fraternities have always been depicted in movies as these over-the-top party palaces and Neighbors really got me thinking about how dumb and unrealistic that concept really is.  For starters, it is supposedly okay for a college fraternity to move into a residential neighbourhood, with the college’s dean (played in the film by Lisa Kudrow) only caring about whether it brings positive or negative headlines.  Then there are the nightly parties, in which this house becomes a hive of sex, drugs, and booze.  I just don’t find this stuff funny anymore and I’m not even sure if I ever did. It is hard to tell what type of audience Neighbors are aiming for.  It is aiming for mature 30-somethings, who would like to see Seth Rogen is more grown-up roles, or is it aiming for the 20-something crowd, who thinks that Zac Efron is a cool guy to watch?  I’m placing my money on the latter, since I have decided, after watching this film, that I am never going to be on the Zac Efron bandwagon.  On paper, it seemed somewhat cool that this former teen heartthrob was starring in an R-rated comedy.  However, Efron turned out to be the aspect of the film I disliked the most.  Sure, you were supposed to hate his character, but I found myself hating Zac Efron, just for being Zac Efron, which includes too many scenes of him having his shirt off.  That said, I did like Dave Franco (James’ younger brother) as Pete, even though his character too had a groan-worthy aspect to him, particularly involving a certain trait Pete has. While I do admit that I found many moments in Neighbors to be very funny, it was not enough to keep this “old man” from groaning at its over-the-top (and admittedly quite tasteless) depiction of frat life.6 | WATCHABLE