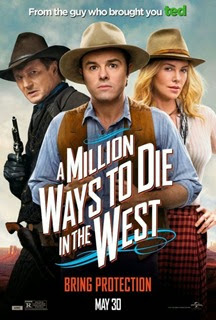 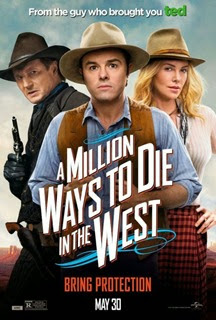 Following the success of his 2012 feature debut Ted, Seth MacFarlane (Family Guy) returns to direct and star in this comedic tale set in the Wild West. Set in the year 1882, in the small town of Old Stump, Arizona, sheep farmer Albert Stark (MacFarlane) tries his best to avoid the many violent confrontations (and deaths) that happen in the West.  However, Albert’s cowardly behaviour does not impress his girlfriend Louise (Amanda Seyfried), who leaves him for Foy (Neil Patrick Harris), the sleazy proprietor of the local moustache emporium. One day a stranger named Anna (Charlize Theron) comes into town and teaches Albert to find his courage, which is put to the test when, Anne’s renowned outlaw husband, Clinch Leatherwood (Liam Neeson) comes looking for her. A Million Ways to Die in the West is a bit of a risk for Seth MacFarlane, since after making a career for himself as a voice actor, he is doing his first live action leading role. I’ll get straight to it and say that MacFarlane’s performance is probably the weakest link in the film.  He’s fine enough, but he is often playing off of the talent that surrounds him, which includes Charlize Theron, Liam Neeson, Neil Patrick Harris, Giovanni Ribisi, and Sarah Silverman. That’s not to say that I didn’t find the film funny, it’s just that MacFarlane is reacting to the comedy more than being the cause of it.  In fact, I would probably say that one of the funnier characters in the film is Silverman as the precocious prostitute Ruth, who is hypocritically saving herself for her  shy boyfriend Edward (Ribisi). The most obvious comparison to A Million Ways to Die in the West would be Mel Brooks’ 1974 western parody Blazing Saddles.  However, I sadly haven’t seen that film, so I can’t say how it compares to MacFarlane’s film.  I will say that A Million Ways to Die in the West continues to use the lowbrow humour and pop culture references that Seth MacFarlane has become known for from Family Guy and his previous film Ted.  In fact, it’s a pop culture reference, and surprise cameo, which makes up one of the most memorable moments in the film for me.  The film does resort to a few tasteless gross-out gags, which left me groaning rather than laughing, but I still found the film to be enjoyable, despite the humour being quite dumb. Even though A Million Ways to Die in the West is meant as a farce of westerns, I was still a bit impressed at how well the western landscapes were shot, particularly during the film’s opening credits.  The actual plot of the film is a bit on the generic side and is more of a springboard for the film’s humour, which does indeed include many unique deaths, though not as many as in the title.  Altogether, A Million Ways to Die in the West is a dumb, yet enjoyable romp in the Wild West, which should please fans of Seth MacFarlane’s previous work.8 | LIKED IT