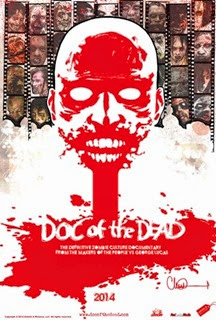 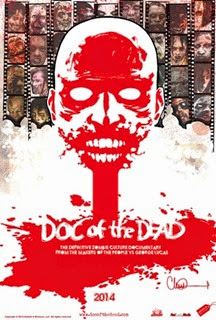 From director Alexandre Philippe (The People vs. George Lucas) comes this examination of the evolution of the zombie in film and literature, as well as its impact on pop culture.  Zombies began as voodoo creations in films, such as 1932’s White Zombie, before being reinvented as the living dead in George A. Romero’s The Night of the Living Dead.  Doc of the Dead takes a look at the continued popularity of zombies, which have now entered the mainstream.  The film also ponders whether a zombie apocalypse could really happen and what we can do to prevent one. Doc of the Dead opens with what appears to be a debate about the zombie apocalypse in the Canadian House of Commons. While it’s unknown whether these statements were actually made by Canadian politicians, this opening leads into a quite entertaining dramatized news report about a zombie invasion, which is filled with many familiar celebrity faces.  It is definitely a very fun way to kick off a documentary about zombie culture. The current zombie resurgence has been going on for about a decade now, arguably beginning with the 2002 release of Danny Boyle’s 28 Days Later, but really kicking into high gear with the 2004 releases of Zack Snyder’s Dawn of the Dead remake and Edgar Wright’s Shaun of the Dead.  Today, The Walking Dead is the number one show on cable television and zombie films have entered the mainstream realm, with PG-13 films, such as World War Z, and even children’s films, such as ParaNorman. Featuring interviews with the likes of George A. Romero, Bruce Campbell, and Simon Pegg, Doc of the Dead covers everything from why zombies are so appealing to the eternal debate of slow zombies vs. fast zombies. While many credit George A. Romero’s The Night of the Living Dead with creating the modern interpretation of the zombie, they have existed in films since at least the 1930s.  These original zombies, in films such as 1932’s White Zombie, were more the result of voodoo spells than the living dead.  In fact, when Romero made The Night of the Living Dead, he thought he was creating a completely separately monster, which he called ghouls in the film.  It wasn’t until people started calling these creatures zombies that Romero decided to just go with it. The concept of the zombie is constantly changing with the culture, though they always seem to represent our fear of death.  For some people, the possibility of a zombie apocalypse is very real thing and there is even a whole market dealing with zombie survival.  While some, like Max Brook’s Zombie Survival Guide, is somewhat tongue-in-cheek, others seem to truly believe that the zombie apocalypse is not a question of if, but when. With events like the Toronto Zombie Walk and countless merchandise, it seems like zombie culture is here to stay and Doc of the Dead is a film that should please any fan of the living dead. 8 | LIKED IT Doc of the Dead opens today at Cineplex Yonge and Dundas