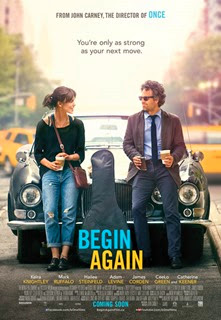 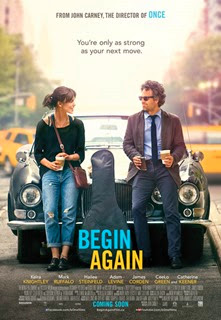 Seven years after his breakthrough film Once, Irish director John Carney returns with another musical drama set in New York City.  Dan Mulligan (Mark Ruffalo) is a disgraced record executive, who stumbles upon an acoustic performance by singer-songwriter Greta (Keira Knightley). An English ex-patriot, Greta is struggling with her recent break-up with her rock star ex-boyfriend Dave Kohl (Adam Levine).  Impressed with her music, Dan wants to make an album with Greta, which they decide to record guerrilla-style on the streets of New York City. Aside from a couple Irish films, John Carney hasn’t really been heard of since he charmed audiences with Once in 2007.  It can easily be surmised that Begin Again is trying to recapture the magic of Once in an American setting, right down to the very similar-looking poster.  Sadly, Begin Again is not the second coming of Once, even though it really wants to be. With Once being one of my favourite films of the last decade, I really wanted to like Begin Again.  While there were indeed aspects of the film I did like, others were quite hokey.  One aspect of the film that I quite liked was Keira Knightley’s lead performance, with he character being quite likeable throughout.  I also enjoyed the songs in the film, many of which were sung by Knightley.  In fact, the music is probably the “make it or break it” element of the film, with your overall enjoyment depending on whether you like the songs, which are more in a pop-rock vein, as opposed to Once’s acoustic ballads. So, what didn’t quite work for me? For starters, Mark Ruffalo came off as a bit too creepy at times and seemed a bit miscast.  Sure he’s playing a down on his luck character, but I wish he was more of a likeable down on his luck character.  Maroon 5’s Adam Levine only seems to be in the film to sing a few songs and is not too great in the scenes he has to act.  At least he has a more meaningful role in the film than CeeLo Green, who appears for what is essentially an extended cameo in the middle of the film, in which he doesn’t even sing (save for a weird beat-boxing scene). At its core, Begin Again is trying to speak out against the heavily manufactured nature of the record industry.  One of the ways the film does this is by contrasting Greta and her pure singer-songwriter style with her ex-boyfriend Dave, who has given into the heavily-produced rock star lifestyle.  Of course, the actual plot of the film is just a reason to have many musical performances in the film.  For the most part I liked the songs in the film, however there’s a scene involving instruments playing themselves, which may come off to some as a little too cheesy.  Also one thing I’m still scratching my head about is the fact that the resolution to the film’s plot is played out during the end credits and almost seems like something that was tacked on after the fact.  It’s not too much of a big deal, other than the fact that some people may leave the theatre before they even see this resolution. Overall, while Begin Again fails big time in comparison to Once, I will give it a minor pass, based on the songs and Keira Knightley’s performance.7 | FAIR