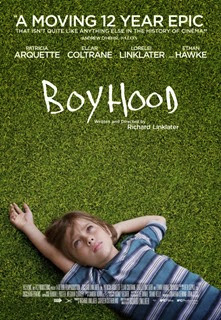 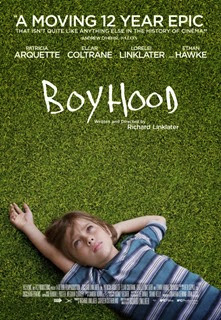 12 years in the making comes director Richard Linklater’s chronicle of a young man’s life from childhood to college.  Six year old Mason Jr. (Ellar Coltrane) is a young boy, who lives with his divorced single mother Olivia (Patricia Arquette) and older sister Samantha (Lorelei Linklater), with the kids receiving regular visitations from their father Mason Sr. (Ethan Hawke).  As the years pass by, Mason learns the hardships of growing up, as he copes with his mother’s new lovers, relationships, and trying to find out what the point of life is. In what can be described as a very unique production schedule for a film, Richard Linklater filmed Boyhood a few weeks every year from the summer of 2002 until October 2013.  The result is a film, where we watch this child (and the entire cast) age before our very eyes.  It is quite amazing how well the film pulls this off, with the film using a character or event to segue between time periods, and it is easy to forget that Mason began as a child at the start of Boyhood’s 2h46m running time.  While the the point of the film is watching Mason age from a child to an adult, it is also amazing watching the older actors age.  Ethan Hawke in particular looks shockingly young when he first appears in the film, since he was still in his early 30s when production began. The film makes a clever use of pop culture references to help clue the viewer into exactly when a scene is taking place.  This includes songs that are playing in the background, news reports that are playing on TV, and even the model of cellphone that the characters are using.  In fact, there is one scene in the film, shot around 2008, where Mason and his father talk about a certain popular film series, which comes off as quite ironic and humorous when watching it today. The plot of Boyhood often seems very vignette-based at times, since each time jump seems to deal with a single event of Mason’s life.  However, as the film goes on, these events gather together and help to define the person that Mason becomes.  In fact, the keys scenes in the film come towards the end when Mason, who by this time looks remarkably like a young Ethan Hawke, has some final conversations with his parents, before heading off for college.  In fact, I was almost in tears during the scene Mason is saying goodbye to his mother. Altogether, Boyhood is not only a huge filmmaking achievement, that is unlikely to be done again, but it is also an excellent and emotional story about growing up and what exactly the point of life is.10 | LOVED IT