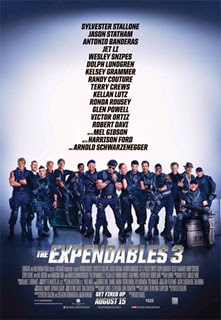 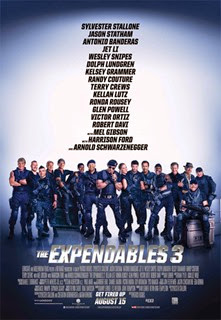 The team of mercenaries recruit new blood to face an old foe in The Expendables 3.  After freeing imprisoned Expendables member Doc (Wesley Snipes), Barney Ross (Sylvester Stallone) leads his team of Lee Christmas (Jason Statham), Gunnar Jensen (Dolph Lundgren), Toll Road (Randy Couture), and Hale Caesar (Terry Crews) to intercept an arms deal.  Barney is shocked to find that the arms trader in the deal is Conrad Stonebanks (Mel Gibson), the co-founder of The Expendables, who was long thought dead.  When a member of the team is severely injured in the ensuing showdown, Barney decides to recruit a new younger team to help him apprehend Stonebanks.  The old and new generation of Expendables will have to team together to face this formable foe. I suppose that it was only a matter of time before The Expendables film series would play the age card.  Sylvester Stallone is now pushing 70 and even younger members, like 47 year old Jason Statham, are starting to show crow’s feet around their eyes.  While the concept of having various action stars team up is a fun one, there had to be a point where they make reference to the advancing age of the actors.  As such, most of the original team ends up on the sideline for much of the film, as Barney recruits a new younger team, which includes ex-Marine John Smilee (Kellan Lutz), nightclub bouncer Luna (Ronda Rousey), computer expert Thorn (Glen Powell) and weapons expert Mars (Victor Ortiz). Save for a pretty entertaining sequence, in which a retired mercenary named Bonaparte (Kelsey Grammer) introduces Barney to the new recruits, there is nothing about this new batch of Expendables that really stands out.  Most of them are played by very faceless actors and they only seem to be in the film, because the plot requires them to.  Probably the most memorable of these new recruits is MMA fighter Ronda Rousey as Luna, if only because she is the only female member of the team, with fighting skills that somewhat makes up for her lack of acting skills. The bland younger team is just one of the ways The Expendables 3 loses focus on what made the series fun in the first place. Admittedly I found the first Expendables film to be merely OK, but I had quite a bit of fun watching the second film with its hyper-violent action and inclusion of 1980s action stars like Arnold Schwarzenegger, Bruce Willis, Chuck Norris, and Jean-Claude Van Damme.  The only sign of that fun really remaining in The Expendables 3 is a hilarious supporting performance by Antonio Banderas as the very chatty (and crazy) Galgo, who essentially has the scene stealing role Chuck Norris had in the second film.  While Schwarzenegger makes his return, in a much expanded role, the in-jokes around his screen persona are mostly missing (save for a single line in the climax).  Willis was replaced in the film by Harrison Ford, who does a fine enough job in his relatively brief role and even gets a bit of a Han Solo moment.  At least he has more screen time than Jet Li, who has gone from top billed lead to essentially a cameo. The biggest thing missing from The Expendables 3 is the bloody violence, which has been toned down to get a PG-13 in the United States.  The extreme mayhem was part of the reason why the previous film was so fun to watch and The Expendables 3 feels so neutered without it.  Also, while Mel Gibson gets off a few good monologues as the film’s villain, he doesn’t quite match the menace of Jean-Claude Van Damme from the previous film.  He is supposed to be one of the more formable foes for the team, who knows all of their tricks, but it’s hard to get past the fact that it is Mel Gibson playing a villain.  I think I preferred his more cartoonish villain from Machete Kills. While The Expendables 3 has signs of what made the films fun in the past (i.e. Antonio Banderas’ role), it is impossible to ignore how the series has now degraded into toned down, generic mediocrity.6 | WATCHABLE