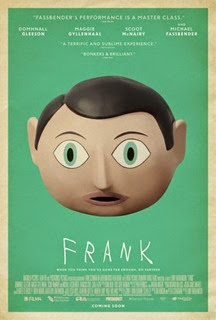 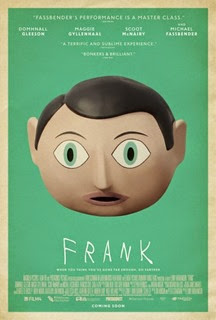 An experimental music group is lead by an eccentric man in a papier-mâché head in the indie comedy-drama Frank.  Jon (Domhnall Gleeson) is a wannabe musician, who stumbles upon a band called “Soronprfbs,” who are trying to stop their keyboardist from drowning himself in the ocean.  Needing an extra man for their performance that night, the band’s manager Don (Scoot McNairy) asks Jon if he can play keyboards at the show.  It is at the concert where Jon finds out that the Soronprfbs is lead by a man named Frank (Michael Fassbender), who inexplicably wears a giant papier-mâché doll’s head.  After the show, Don asks Jon to join the band as they record their new album at a remote cabin in Ireland.  Even though Frank takes an instant liking to Jon, the rest of the the Soronprfbs do not really trust him, particularly their temperamental theremin player Clara (Maggie Gyllenhaal).  Jon logs the recording sessions on social media, which results in Soronprfbs becoming an internet sensation and being asked to play at SXSW.  However, the heavily perfectionist Frank might not be ready to perform in front of such as large crowd. Frank is loosely inspired by the character of “Frank Sidebottom,” who was performed by the late British comedian Chris Sievey.  Having not really seen the original character, I’m not really sure how familiarity with the Frank Sidebottom character would affect one’s enjoyment of Frank.  I personally saw the film as its own independent entity and I have to say that I liked the film that I saw, even though it turned out to be a bit different than I expected it to be. While Frank is the title character, the film is told from the perspective of Jon, who is the outsider in this very eccentric band.  Jon is introduced at the start of the film writing a (quite humorous) song in his head, with lyrics based on the people and objects he walks past.  He is desperate to become successful as a musician and he sees joining the Soronprfbs as his chance for fame.  However, as he posts the band’s activities on social media and progressively gets more attention, this quest for fame starts to go to his head, even though it might be too much for Frank to handle. On its surface, Frank seems to be a quirky and fun musical comedy about an eccentric guy, who wears a giant head.  For much of the film, nobody really questions why Frank is wearing a papier-mâché mask and the audience is left to laugh at his odd behaviours and ticks.  Without saying too much, the film takes a bit more of a dark and serious turn in the third act, which may cause the audience to question whether laughing at Frank’s behaviours was the right thing to do.  While the change of tone in the third act might turn off some viewers, I still have have to say that I thought that the film ended on a major high note, with a powerful performance by the band. Altogether, Frank was a quirky musical dramedy, with a great performance by (a mostly masked) Michael Fassbender.8 | LIKED IT