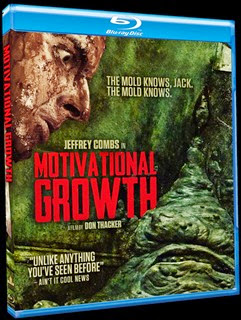 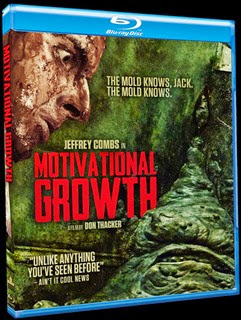 Out today on DVD and Blu-Ray is the very weird dark comedy Motivational Growth, directed by Don Thacker.  The film focuses on on an agoraphobic man named Ian Folivor (Adrian DiGiovanni), who hasn’t left his apartment for 16 months and spends the majority of his time channel surfing on the TV.  When the TV suddenly breaks down, Ian doesn’t know what to do and even attempts committing suicide by mixing chemicals in his bathtub.  When the attempt fails, Ian finds out that a giant mildew growth on the wall, known only as The Mold (voiced by Jeffrey Combs), has started talking to him.  The Mold offers to help get Ian out of the funk he is in and even help Ian court his attractive neighbour Leah (Danielle Doetsch).  However, it quickly turns out that The Mold has ulterior motives and Ian learns the downside of trusting a motivational growth. I first saw Motivational Growth as part of the 2013 Toronto After Dark Film Festival and I thought that it was a very weird film.  The main highlight of Motivation Growth is Jeffrey Combs’ soft-spoken, yet vaguely menacing, voice-over performance as The Mold, who is performed by a pretty impressive looking animatronic puppet.  A dark comedy, with some flourishes of shocking violence, Motivational Growth is also an ode to nerd and geek culture, with a score made up of 8-bit midi music and even an animated scene in the style of an 8-bit video game.  While Motivational Growth is not exactly the type of film that would be enjoyed by mainstream audiences, it is sure to receive a cult following. The blu-ray for Motivational Growth is highlighted by the following behind-the-scenes featurettes: Inspiring Growth: The Mold (11:21), The Fall of Ian: The Stunts of Motivational Growth (6:30), Grime, Blood & Goo: The Gore in Motivational Growth (12:38), The Mold Knows, Jack: The Characters in Motivational Growth (20:26).  Running nearly an hour long, these featurettes give a fairly in-depth look at the film, including the mechanics behind the Mold puppet, which is central to the plot.  Also on the blu-ray is a commentary track with Jeffrey Combs, Adrian DiGiovanni, and Don Thacker, three trailers for the film, and a photo gallery. If you are in the mood for a very weird (and sometimes disgusting) dark comedy, than Motivational Growth might be the film for you. Film Rating: 8 | LIKED IT
Blu-Ray Rating: 8 | LIKED IT Purchase from Amazon (Canada)
Blu-Ray
Standard DVD Video on Demand
iTunes (Canada)
VHX (Special Edition)
VHX (Film Only)