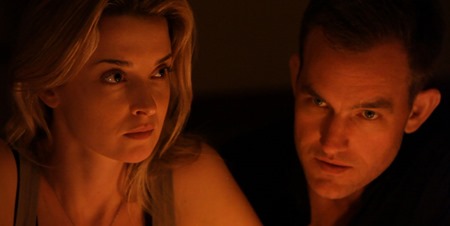 Indie Spotlight is a series focusing on reviews of independent films This review may contain SPOILERS Strange things happen at a dinner party in the indie sci-fi film Coherence.  A group of eight friends, Em (Emily Foxler), Kevin (Maury Sterling), Mike (Nicholas Brendon), Beth (Elizabeth Gracen), Amir (Alex Manugian), Laurie (Lauren Maher), Hugh (Hugo Armstrong), and Lee (Lorene Scafaria), gather together for dinner on the same night a comet is passing them by.  Beginning with a sudden black out, a number of strange occurrences happen, which will cause these eight friends to examine their relationship to each other. I purposely made the above plot synopsis as vague as possible, since I saw Coherence knowing next to nothing about the plot, which is probably the best way to experience the film.  That said, it will be quite difficult to write about the film, without getting into some more specific plot details.  As such, if you don’t want to know anymore about the plot of Coherence, do not read this review any further. Coherence is a mind-bending science fiction tale about eight friends, who find themselves in the middle of reality-bending quantum paradox.  The film takes its title from the concept of quantum decoherence and makes several references to the 1935 thought experiment of Schrödinger’s cat, which states the theory that multiple different realities exist simultaneously, before collapsing into one.  That, in essence, is what’s happening in Coherence, as the group discovers that there is a house down the street, which looks exactly like the one they are currently in. The plot of film doesn’t necessarily require a degree in quantum physics to understand, particularly since the character of Hugh delivers all the needed exposition.  However, the plot gets progressively more complicated as the film adds various variables, such as glow sticks, a box of photos, and a note left on the door.  Something simple as a sudden change in colour turns, what starts off as an apparently straight-forward reality split, into something a bit difficult to control. One thing that is quite appealing about Coherence is how it uses its science fiction premise as a springboard for a relationship drama.  As the night wears on, many of these individuals issues come to light, including Beth’s drug use and a secret held by Mike.  Arguably, the main protagonist of the eight is Em, who remains the main constant throughout all the film’s revelations. Altogether, Coherence turned out to be a wonderful little sci-fi mind twister. 8 | LIKED IT Coherence is now playing at the TIFF Bell Lightbox