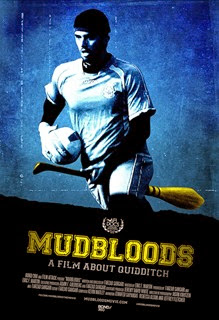 The real-world adaptation of the Harry Potter sport of quidditch is the subject of the sports documentary Mudbloods. Inspired by the sport played in the Harry Potter books and films, “Muggle quidditch” was created in 2005 at Middlebury College in Vermont.  The sport quickly grew, resulting in the beginning on the annual Quidditch World Cup in 2007.  The quidditch team from UCLA travel to the fifth annual World Cup in New York, with the hopes of making it all the way. Played primarily by university and college students, the growth of quidditch is the interesting case of a game, inspired by a fantasy novel, trying to to gain credibility as a real sport.  The real-world game of quidditch is a co-ed full-contact sport, described as a mix between rugby and dodgeball.  With the exception of the requirement that the players hold a broom between their legs, this version of quidditch is treated as a serious game with little of the fantastical elements from the Harry Potter universe. In fact, the most fantastical quidditch element, the magical flying ball known as The Snitch, is represented by a guy dressed in yellow, with a tennis ball-filled sock tucked in his pants. The documentary Mudbloods plays off just like any other inspirational sport documentary, except for the fact that it centres around the sport of quidditch.  The goal of this documentary seems to be about showing how quidditch has become a very real thing and that it should be allowed to develop as a proper sport.  Even though many of those playing the sport are accused of being nerds and geeks, quidditch can be just as gruelling and physical as any other contact sport. The film follows the UCLA quidditch team as they travel to New York for the Quidditch World Cup, with the goal of beating the undefeated champions Middlebury.  The event was founded by, the official governing body, the Intercollegiate Quidditch Association, headed by commissioner Alex Benepe.  As one of the original Middlebury quidditch players, Benepe helped with the sport’s growth and the film looks into some of the challenges he faces with organizing the Quidditch World Cup. Since Mudbloods depicts quidditch as a straight sport, the weakest moments of the film comes when it connects back to Harry Potter.  In particular, the film features Katie Aiani, who is considered to be the world’s number one fan of Harry Potter.  Despite the fact that she is seen in the film attending the Quidditch World Cup, her inclusion seems really out of place.  While it’s impossible to ignore qudditch’s origins as a game played in the Harry Potter universe, the inclusion of a Harry Potter superfan seems to be going against the film’s goal of showing quidditch as a legitimate sport that wants to be seen on its own merits. While the film could have featured more about the continued growth of quidditch, particularly in the three years since it was filmed, it still works pretty well as an inspirational sports story. 8 | LIKED IT Mudbloods screens at the Bloor Hot Docs Cinema on Sunday, October 12, 2014 (as part of a double bill with Harry Potter and the Goblet of Fire) and Monday, October 13, 2014