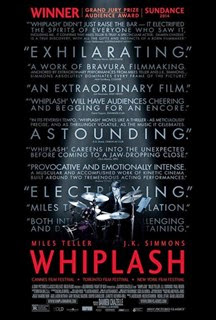 An aspiring jazz drummer aspires to reach perfection in the musical drama Whiplash.  Andrew Neyman (Miles Teller) is a young man, who enrols in an elite music conservatory, in the hopes of becoming one of the next great jazz drummers.  He is chosen to become part of the school’s jazz ensemble, which is lead by the perfectionist conductor Terence Fletcher (J. K. Simmons).  Fletcher, who refuses anything less than the best, pushes his musicians to their extreme limits, with there being huge consequences for those who don’t play up to par.  Under the greatest stress of his life, Andrew must prove to Fletcher that he has what it takes to be a great drummer. Whiplash is a pretty intense drama about this young drummer’s determination to succeed.  Andrew is the youngest member of this jazz ensemble and he constantly has to fight to prove himself.  Just when it seems that things are going OK for Andrew, Fletcher sends another obstacle in his direction.  With his foul-mouthed insults and sometimes violent outbursts, Fletcher is a very frightening conductor, who isn’t afraid to push his musicians to the absolute limit. Whiplash has probably one of the best performances by J.K. Simmons in years.  Terence Fletcher is probably the meanest character that Simmons has played since his breakthrough role as the sadistic white supremacist Vern Schillinger on the HBO TV series Oz.  However, despite his very stern exterior, Fletcher turns out to be a much more layered character, who is using these extreme methods to bring out the best in his musicians. Whiplash can also be seen as a bit of a breakthrough role for Miles Teller, who up until now has appeared in mostly young adult films, such as The Spectacular Now and Divergent.  Teller is a real drummer and the very high tempo drumming that he does in the film can be quite intense to watch and even results in some bloodshed.  Whiplash is at its best when it is developing the very tumultuous relationship between Andrew and Fletcher.  There is a subplot in the film that has Andrew pursuing a romance with a girl named Nicole (Melissa Benoist), however it ends up feeling a bit out of place with the rest of the film.  That said, the film does feature a decent supporting performance by Paul Reiser as Andrew’s father. Ultimately, Whiplash is all about the music and the film’s final performance is definitely what makes the film.  The final five minutes of Whiplash is pretty much guaranteed to have audience on the edge of their seats and it helps to make it one of the better musical films in quite a while.  9 | REALLY LIKED IT