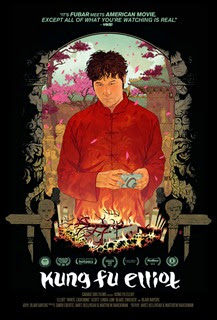 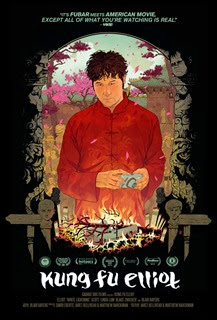 Elliot “White Lightning” Scott is a man from Halifax, whose goal is to become Canada’s first action hero.  Claiming to have 7 lightweight kickboxing titles, Scott has written, directed, and starred in a series of hilariously awful no-budget kung fu b-movies, with titles such as They Killed My Cat (2009) and Stalker and the Hero (2010).  With Scott a year in production on his latest film Blood Fight, his girlfriend Linda slowly becomes tired of his filmmaking antics and wishes for Elliot to get a normal job and finally get around to proposing. It quickly turns out that Elliot Scott’s real life is much more interesting than his movies. Kung Fu Elliot really needs to be seen to be believed.  In all honesty, I watched the film based on its title alone and I had no idea what I was getting into.  At first, Kung Fu Elliot seems like a farce; it is obvious from the start that Elliot Scott is somewhat delusional and is not really “Canada’s Jackie Chan” and the audience will spend much of the film laughing at him.  Then some revelations are made and the laughter turns to utter shock. Kung Fu Elliot is both a great example of truth being stranger than fiction and how editing can truly make a documentary.  Knowing what they knew at the end of filming, filmmakers Matthew Bauckman and Jaret Belliveau were left to craft a film that allowed the audience to adjust their sympathies of Elliot Scott, as more and more revelations are made.  Over the course of the film, Elliot Scott goes from being a quite delusional producer of bad kung-fu movies to frankly quite a bit of a jerk.  In fact, as Elliot steadily becomes more dislikeable, the viewer’s sympathy moves towards his suffering girlfriend Linda. Since Kung Fu Elliot is really all about the shocking revelations made in the film, I don’t really want to say too much more. However, this is definitely a film that should be watched more than once, just to see if the filmmakers put hints to the revelations made towards the end.  Kung Fu Elliot is one of those documentaries that will have you questioning “Is this for real?” as you watch it.  However, as the film reveals, there are many definitions to the term “real.”  All together, while Kung Fu Elliot starts of as a hilarious farce, it turns into a shocking character study of a man caught up in his own delusions.  9 | REALLY LIKED IT Kung Fu Elliot opens today at the Carlton Cinema