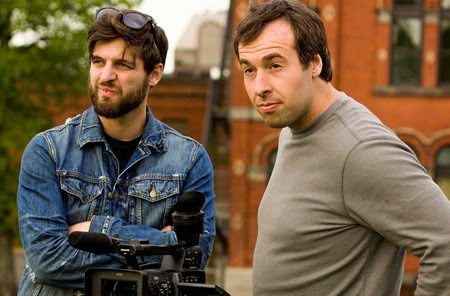 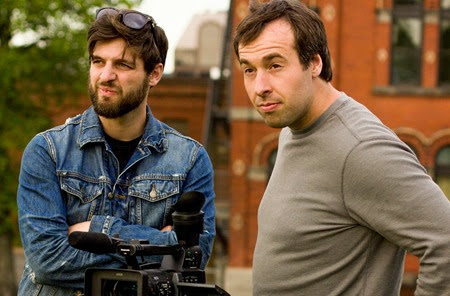 Opening today at the Carlton Cinema is the documentary Kung Fu Elliot, about a man named Elliot Scott, who considers himself to be “Canada’s Jackie Chan.”  Kung Fu Elliot is directed by the duo Matthew Bauckman and Jaret Belliveau.  The film is the directorial debut for Bauckman, who previously worked as an editor on Belliveau’s previous film Highway Gospel (2011).  The two took the time to answer some questions via e-mail about Kung Fu Elliot. Please note: Since this discussion goes into specific detail about some of the revelations made within Kung Fu Elliot, it is best advised to see the documentary first, before proceeding any further. 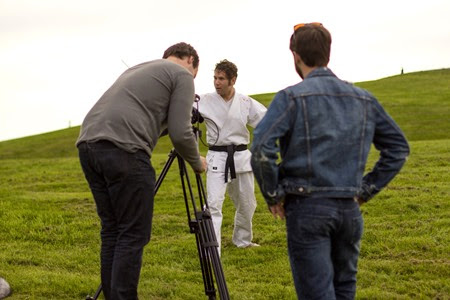 Sean Kelly: How did you first become aware of Elliot Scott? Matthew Bauckman: We first found out about Elliot after reading several local newspaper articles written about him and his partner, Linda Lum. In the articles, Elliot was promoting himself as an accomplished martial artist and award-winning filmmaker. When we watched the trailer for Elliot and Linda’s first movie They Killed My Cat, we were intrigued. We tracked down some of his films at a local video store and then contacted Elliot about making a film. He invited us down to the set of his third movie Blood Fight and filming began… SK: What was your process in making the film? Jaret Belliveau: The key to the film was when [his girlfriend] Linda started opening up to us, because that was the other side of the story. Elliot could only carry the film so much. He has no self-dialog. He can’t analyze his actions in a way that would translate to the viewer, so we needed other people to show his world and how he operates within that. I related to him just from his passion and knowing the drive it takes to make films, so for us he just seemed like a lovable dreamer who had a great group of people around him. 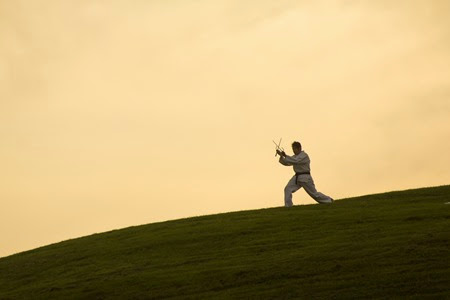 SK: Despite Elliot Scott being somewhat delusional, it was somewhat humorous watching his attempts at becoming an action star.  However, when Scott’s true nature is revealed, the laughter turns to shock.  When did you begin to realize that Scott was not all who he claimed to be and how did that affect your approach to the film? JB: From the start Matt and I knew that Elliot was exaggerating to some degree just because of the difference between the [fairly positive] newspaper articles we were reading and the quality of the trailers of his films that we were seeing. But we thought mostly he was a lovable guy who was trying to do anything to get known and to get his movies out there. We thought it was all pretty innocent for a while. And what he was doing with Bloodfight was great. We came to love all these people playing the characters in his movies like Blake and Linda and Blair. In Nova Scotia, where they were living, there’s no real platform to get what they were getting from Elliot. They got to be stars in their own way. Elliot really provided that. No matter what was true and what wasn’t, even though there were inconsistencies, that’s what made it seem like a positive thing for everyone around him at first. SK: You get directly involved with the action of the film towards the end, including being kicked out of Elliot Scott’s house. Before then, how difficult was it to remain objective filmmakers, after all that’s learned about Elliot Scott? MB: Well I think we should rephrase that a bit. Jaret was punched in the head 7 times. It was a raw moment. Everything that transpired in the end was as big a surprise to us as it is to the audience, I think. In the beginning we set out to shoot the film in an objective manner, without much intrusion on our part, but as we got more involved with everyone’s lives we sort of became characters. After that incident our biggest hurdle was remaining objective while we were editing the film. 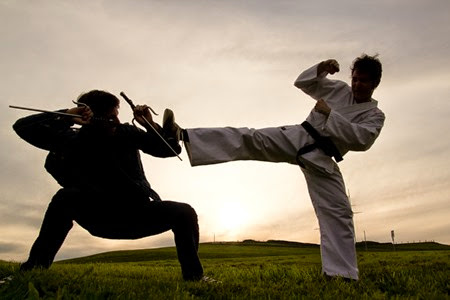 SK: Elliot Scott’s girlfriend Linda Lum ultimately becomes the more sympathetic subject in the film, especially after she reveals the truth about the lies Elliot has been saying.  Was this interview with Linda done during or after most of the filming was completed? JB: That interview with Linda was filmed before the last scene. At that point Linda had figured things out for herself and felt comfortable confiding in us. I think we provided a sounding board for her to voice her concerns about Elliot. SK: With all that you knew after shooting the film, how did you go about editing Kung Fu Elliot? Did you purposely try to make Elliot Scott seem more pleasant early on, so it was more shocking when the revelations were made? MB: With the edit we tried to mimic our experience with Elliot. To be honest, after interviewing Elliot the first time we did leave with alot of questions about his tall tales but were in love with the idea of Bloodfight. Elliot has a certain boyish charm and that is what attracted us to him to begin with. We definitely knew that focusing on Elliot’s good qualities early on would make for a bigger twist near the end. 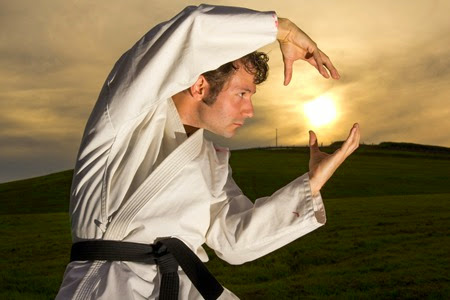 SK: Has Elliot Scott ever been heard of again after the completion of the film? JB: Yes, We have received a couple of emails from Elliot’s fetlife account. The website states that Elliot is living in Inner Mongolia. Kung Fu Elliot opens today at the Carlton Cinema
Production Stills credit Brett McFayden