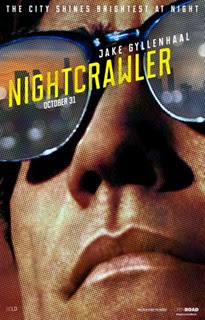 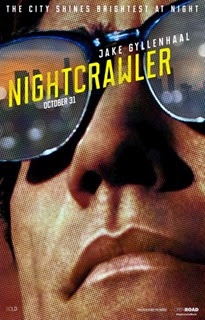 Jake Gyllenhaal plays a videographer, who would do anything to make the news in the thriller Nightcrawler.  Louis Bloom (Gyllenhaal) is a somewhat antisocial man, who is driven to find a career that meets his desire to make a name for himself.  At the site of a traffic accident, Bloom meets a man named Joe Loder (Bill Paxton), who introduces him to the world of “nightcrawling,” where freelancers videotape crime scenes and sell the footage to local news broadcasts.  Fascinated with this idea, Bloom acquires a camcorder, police scanner, and an assistant named Rick (Riz Ahmed) and begins filming crime scenes and selling the footage to morning news director Nina Romina (Rene Russo).  Desperate to get the biggest scoops, Bloom is willing to go to extreme lengths to get his footage. Equal parts thriller and media satire, Nightcrawler is a quite a well constructed film about the lengths this one mans goes to make it big as a freelance crime scene videographer.  Jake Gyllenhaal gives an excellent performance as Louis Bloom, who cares greatly about about getting great footage and advancing his career as a freelancer, even if it means putting others in harm’s way.  With his dishevelled looks and odd demeanour, Bloom is quite obviously a barely functioning sociopath, who only gets by because he happens to be quite good at what he does. Nightcrawler is quite good at generating suspense, as Bloom steadily becomes much more hands on at the crime scenes he is videotaping.  Bloom puts himself into increasingly dangerous situations to get his footage, though he shows little concern about the people that might get in his way.  He also leverages his increasing freelancing success into bigger payouts at the news studio, with him developing a bit of a love/hate relationship with Nina. Even though Jake Gyllenhaal gets the more showy role in Nightcrawler, Rene Russo is still quite important, especially as her character gets increasingly more desperate for ratings.  Even though much of the footage that Bloom gives Nina is somewhat morally ambiguous, she still decides to run it, since it would make a great news story.  With Nina continually supporting the obsession of a pretty obvious sociopath, without any real questions, Nightcrawler is giving a somewhat satirical message about the media and their apparent desire to do anything for a good story.  In fact, there are some scenes that suggest that Nina knows more about the lengths that Bloom is going to to get great footage, though she is letting it slide, because it is helping her career. Having been a fan of Jake Gyllenhaal since Donnie Darko, I am amazed at how interesting his career remains.  Nightcrawler continues the very great career trajectory for Gyllenhaal, which also includes his recent performances in Prisoners and Enemy.  I look forward to seeing what other types of roles Gyllenhaal get in the years to come. 9 | REALLY LIKED IT