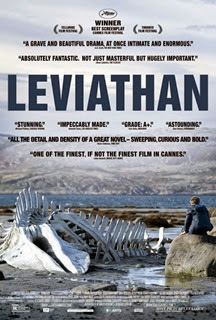 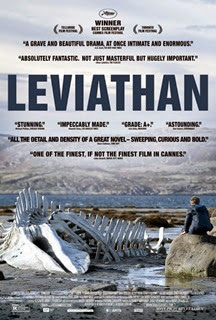 A man in a Russian coastal town fights to keep his home in the drama Leviathan.  Kolya (Alexei Serebriakov) lives on a peninsula by the Barents Sea with his teenage son Roma (Sergey Pokhodaev) and second wife Lilia (Elena Lyadova).  Kolya is in the process of fighting against the town’s corrupt mayor Vadim (Roman Madyanov), who is abusing the law to acquire Kolya’s land for himself.  To help with his case against the mayor, Kolya brings in his old army friend Dmitri (Vladimir Vdovichenkov), who is now a lawyer working in Moscow.  Dmitri comes prepared with dirt on the mayor and plans to blackmail him for a settlement.  However, a series of events unravel, which serve to further complicate this matter. Leviathan, directed by Andrey Zvyagintsev (The Return), seems at first to be a relatively simple drama.  Kolya is fighting to keep his family home from being repossessed by a corrupt mayor, who plans to tear it down and rebuild on the property.  Kolya’s lawyer friend Dmitri seems perfectly well-equipped to win this fight, which includes acquiring documents to help put pressure onto the mayor for a settlement. There are many events that come to pass over the course of Leviathan that really serve to complicate this property matter.  The main turning point for the film comes in the second act when Kolya and his family, along with Dmitri, join some friends for a birthday gathering of vodka drinking and shooting guns at portraits of past Russian leaders.  Things quickly become more dire for Kolya’s situation, as the many individual events and developments come together in one final, and somewhat ironic, knockout blow. I would be very hard pressed to think of anyone who would leave Leviathan thinking that humanity is just great.  There is one point in the film when a character comments how humans are the most dangerous of all animals.  This statement is proved throughout Leviathan, which ends up being a somewhat shocking social commentary about human nature, with Kolya ending up being a victim of corrupt individuals, the opinions of others, and just plain bad luck.  Particularly striking are courtroom scenes in the film, where judgements are read off in a rapid fire and almost robotic way. Leviathan is also highly critical of the current state of life in Russia, with the film not hiding its criticism of mixing of church and state. Vadim frequently being seen getting advice from an orthodox priest he’s friend’s with and the film ends with a church sermon, which comes off as quite ironic, given the events that have come before it. For much of its running time, it was hard to know exactly what Leviathan was building up to.  When everything does come together in the third act, I ended up being completely floored.  This undoubtedly a very cynical film and I ended up leaving the theatre feeling somewhat icky.  However, this also makes the film a quite well done social commentary, which covers both the downside human nature and the current state of life in Russia. 9 | REALLY LIKED IT