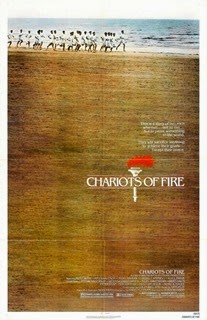 In 1981 a British historical drama named Chariots of Fire won the People’s Choice award at the Festival of Festivals.  The film would then go on to win four Academy Awards, including Best Picture.  This marks the beginning of the People’s Choice Award’s association with Oscar glory, with many of the winners of this award going on to get nominated for or win Best Picture.  The films focuses on two athletes, Harold Abrahams (Ben Cross) and Eric Liddell (Ian Charleson), as they compete against each other and train to represent Great Britain in the 1924 Olympics in Paris. Chariots of Fire is a film that has become well known, less for its story and more for its theme by Vangelis, which has become as the ultimate inspirational tune.  In fact, going in, I knew nothing about the story of Chariots of Fire, except that it involved running.  What I didn’t really expect was for the film to come off more like a BBC drama than a sports film, particually because much of the film takes place at the University of Cambridge, with an entirely British cast.  While there is indeed plenty of racing in the film, much of the plot focuses on the drama that surrounds these two rival athletes. One of the biggest challenges faced by Harold, who is arguably the lead character of the film, is the fact that he is Jewish and is treated by anti-Semitism by the staff of the University of Cambridge.  In a similar fashion, Eric Liddell misses her own religious practices while running, which becomes a point of pretention.  The films comes to a climax at the Olympics, where are competing and representing Great Britain. Much of the cast of Chariots of Fire was relatively unknown to me, though I did notice a few familiar faces in the film.  Probably the most well known actor in the film is Ian Holm, who plays Harold’s running coach Sam Mussabini.  While I thought that this was an OK film, I can’t really understand while it would receive so much acclaim. This leads me into going back to the music, which is ultimately my biggest take-away from Chariots of Fire.  It is interesting that the score, which would win an Oscar, was done by the same guy who would go on to do the score for Blade Runner.  While many would know the piano-based theme music, the rest of the score is much more electronic and sympathized.  In fact, I would argue that the score of Chariots of Fire is a little out of place for a film taking place in the 1920s. Going in, all I knew about Chariots of Fire was the theme and that is really all that I’m leaving with as well. ★ ★ ★ 1/2 | FAIR