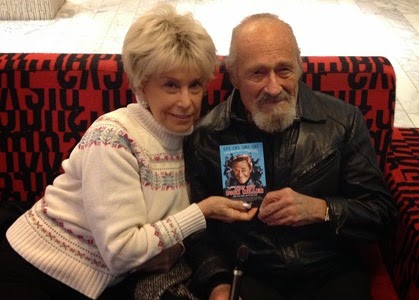 Last week, quintessential character actor Dick Miller was in Toronto, along with his wife Laine, to promote the release of the documentary That Guy Dick Miller, which is now playing at the Carlton Cinema.  Dick Miller has had a long career of nearly 60 years, starring in at least 300 films, which includes being a recurring actor in the films by Roger Corman and Joe Dante, as well as appearances in films such as The Terminator and Tales from the Crypt: Demon Knight.  At 86 years old, there probably isn’t too much gas left in Dick Miller’s tank, however he still has plenty stories to tell about his long and storied career, with him telling me some of them when I sat down to talk to him about the release of the documentary.

According to Miller, the genesis for That Guy Dick Miller came when he was contacted by a German producer looking to make a short film to advance some movies that he had started with Roger Corman. “He wanted a little thing on War of the Satellites and he got in touch with Elijah Drenner, our director, and he said ‘Can you put it together?’ and he said ‘I’ll look at it.’  However, it turned out that there was way too much story in Miller’s career for merely a short.  “There were too many pictures and too big character here for a five minute film, [Drenner] needed something more.”  As such, Laine Miller was brought on to produce, through her company Autumn Rose Productions, and That Guy Dick Miller was born.

One of the framing devices of That Guy Dick Miller is showing Miller on set of a short film called Cutaways, which Miller described as being about actors, including Abe Vigoda, Charlotte Rampling, and himself, who had film roles in films, which were left on the cutting room floor, with Miller having been cut out of Quentin Tarantino’s Pulp Fiction.  “It turned out to be a very interesting little film. They are supposed to be cut out and they go to the neverlands, where we all met.”

Even though Miller, who initially aspired to be a screenwriter, has had a very long acting career, he initially didn’t believe that it would last past his first role in Roger Corman’s Apache Woman.  “It came about as an accident. I was introduced to Roger Corman and he said ‘Where do you come from?’ I said ‘New York.’ He said ‘What do you do?’ I said ‘I’m a writer.’ He said, ‘Nah, we don’t need any writers, we need actors’ and I just screamed ‘I’M AN ACTOR!’”  Ultimately, Dick Miller’s aspirations to be a screenwriter never took off, however he doesn’t any regrets at all about how his career turned out. “It’s all part of life. I could have been selling bagels. Anything that happens, happens and I just took my life as it came along.”

Dick Miller’s career is best known for his work with filmmakers Roger Corman and Joe Dante, with one of Miller’s most famous roles being his performance as Walter Paisley in Corman’s A Bucket of Blood. “I guess as far as pictures go, A Bucket of Blood stands out as the traditional Dick Miller favourite,” said Miller about the film.  The role was so popular that Miller would go on and play other unrelated characters, usually in the films of Joe Dante, also named Walter Paisley. “When it came up I said ‘Didn’t we use that name before?’ Joe Dante said ‘We are going to use it again…and we are going to use it again and we’re going to use it again.’ It just kept going.”  Other than A Bucket of Blood, Miller said that some of his favourite roles were in Demon Knight and The Howling. To wrap things up, Miller commented on whether he hopes That Guy Dick Miller will attract younger viewers to this films, particularly the early ones by Roger Corman. “If they can see them, they’ll see them. It’s hard for me to divide the Roger Corman pictures from the modern Joe Dante films. I think that if there’s an interest, if they’re film goers, they’ll want to see one of these early movies, they’ll seek them out.” That Guy Dick Miller is now playing at the Carlton Cinema