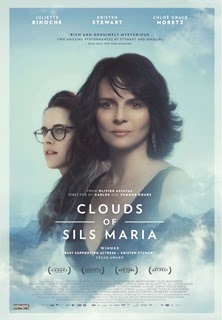 A veteran actress reflects on herself while preparing for a play in Clouds of Sils Maria.  Maria Enders (Juliette Binoche) is a successful middle-aged actress, who is best known for performing the role of Sigrid in the play and film Maloja Snake twenty years ago.  Maria is asked to star in a new revival of the play, except in the older role of Helena, with the role of Sigrid to be played by young tabloid-gracing starlet Jo-Ann Ellis (Chloë Grace Moretz).  Maria reluctantly agrees to the role and goes with her personal assistant Valentine (Kristen Stewart) to a house in Sils Maria, Switzerland to prepare for the role and in doing so has to come to terms with her status as an aging actress. Clouds of Sils Maria, named for the “snake” of clouds that passes through the mountains in Sils Maria, is very much a meta drama, with the fictional character of Maria Enders essentially being a reflection of Juliette Binoche’s own career. Then there is a very obvious parallel between the play Maloja Snake, which centers on the tempestuous relationship between a young girl and an older woman who is eventually driven to suicide, and Maria’s relationship with her personal assistant Valentine.  There are many scenes, which have the two doing a read-through of the lines and it is almost like they are having real conversations with each other. The film also focuses on the difference between “serious actress” Maria and Hollywood starlet Jo-Ann Ellis.  Depicted as an “A-list actress with ambitions of being on the Z-list” Ellis is introduced through a number of internet videos, showing her troubled drugged-out behaviour.  The film also features a pretty humorous film-within-the-film, showing Jo-Ann Ellis as the star of an over-the-top science fiction film, which contrasts with another more arty film clip, from the Maloja Snake film, shown earlier. Clouds of Sils Maria is divided into three clearly distinguishable acts, labeled through on-screen titles.  Probably the most interesting of the three is Part II, which centres completely on the relationship between Maria Enders and Valentine, with the two being the sole characters for much of this section.  Kristen Stewart continues with demonstrate that she is more than just Bella Swan from the Twilight films, with her excellent supporting performance in this film, which won Stewart the César Award in France for Best Supporting Actress. One very noticeable aspect of Clouds of Sils Maria is how many of the scenes will fade to black, often in the middle of an action.  This gives the film something of a vignette feel to it, though it also something reinforces that the plot of the film is somewhat structured like a play, complete with divided acts.  While this editing decision does get a bit jarring at times, the film is ultimately all about the performances. Altogether, Clouds of Sils Maria is an interesting commentary on acting careers and how the best roles are often reserved for the young. ★ ★ ★ ★ | LIKED IT