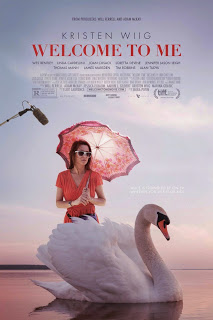 A woman with borderline personality disorder becomes a talk show host in Welcome to Me.  Alice Klieg (Kristen Wiig) is a bi-polar woman, who only has one close friend in the form of Gina (Linda Cardellini) and Alice spends most of her time watching videotaped episodes of Oprah.  Unexpectedly, Alice wins an $86 million lottery jackpot and she decides to use the winnings to fund a talk show, where the main subject is herself.
Welcome to Me is a dramedy dealing with this woman with borderline personality disorder (a modern term for bi-polar), who uses her own talkshow as a way to express the frustrations that has been building up inside of her.  These include using sketches to call out the people who have wronged Alice throughout her life.  The show actually ends up developing a bit of a following, as Alice fulfills her dream of being a television star like Oprah.
It is a bit hard to gauge how I should react to a film like Welcome to Me.  Much of Alice’s behaviour is played for laughs, whether it is her prepared statements with inappropriate information or her sudden profanity-laden fits of anger.  However, it is established early on, through sessions with Alice’s psychiatrist Dr. Daryl Moffet (Tim Robbins), that she has gone off of her medications, which leads to this somewhat self-destructive behaviour.
All of this leads to the question of whether it is appropriate to laugh at the behaviour of someone with a mental illness, especially since it’s established early on that Rich (James Marsden), the co-owner of the small network that gives Alice her talk show, is merely exploiting her for the novelty.  While, at the end of day, Welcome to Me can best be classified as a satire, it eventually did not feel right for me to laugh at Alice Klieg’s behaviour, especially as the film gets much more dramatic later one.
Welcome to Me does have a pretty well put together supporting cast, which includes Wes Bentley as Rich’s brother, and Alice’s love interest, Gabe, Joan Cusack as the show’s director Dawn Hurley and Alan Tudyk as Alice’s ex-husband Ted.  Much of the drama centres around Alice’s friendship with Gina, which begins to strain a bit as Alice’s behaviour begins to become a bit too much.
Altogether, I would say that while Welcome to Me does indeed have some humorous moments, it does come at the expense of a character with a serious mental illness. Not sure how I feel about that.