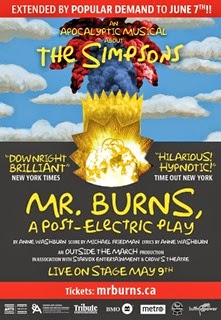 It’s time again for me to diverge a bit from film blogging and write about this new play that just opened in Toronto, which is inspired by The Simpsons.  Originally an off-Broadway production written by Anne Washburn, Mr. Burns, A Post-Electric Play was adapted for its Toronto run by the Outside the March Theatre Company.  Running at “Toronto’s Historic Aztec Theatre” (aka Big Picture Cinemas), the play focuses on a group of survivors in a post-apocalyptic world, who are trying to cling on to their love of The Simpsons.  Designated as a “post-electric play,” Mr. Burns is performed without the use of any on-the-grid electricity. Mr. Burns, A Post-Electric Play is being advertised as an “Apocalyptic Musical about The Simpsons.”  In some ways that is true, however those coming to see the play, expecting it to be 100% about Matt Groening’s characters are going to end up being a little bit disappointed.  While The Simpsons plays a major role in the plot of Mr. Burns, A Post-Electric Play, the production doesn’t truly become about The Simpsons until the final third. The story of the play is told in three acts, which shows the evolution of this post-apocalyptic society, each of which has a different post-electric lighting scheme.  The first act, lit entirely by flashlights and lanterns, is set shortly after the apocalypse and features a group of survivors trying to remember what happens in the "Cape Feare" episode of The Simpsons.  The second act features battery-powered stage lighting and it returns to the survivors 7 years later, as they have formed a theatre troupe trying to stage episodes of The Simpsons, commercials and all.  Finally the final act, which makes heavy use of LEDs and black light, takes place 75 years in the future, where the apocalypse and The Simpsons have merged into one staged mythology. Even though the play is all about building up to the final act, I am not going to entirely write off the first two.  As a whole, the three acts tells a story of how pop culture might evolve into mythology in a post-apocalyptic world.  Each of the three acts have different tones to them, which makes Mr. Burns, A Post-Electric Play essentially three plays in one.  The first act is quite dark and sombre, which has a similar feel to something like The Walking Dead.  The second act is much more upbeat and is headlined by an a cappella melody of pop hits, including Lady Gaga’s “Bad Romance” and Miley Cyrus’ “Wrecking Ball,”  which essentially turns the play into Pitch Perfect for five minutes or so.

While the first two acts of Mr. Burns, A Post-Electric Play have their individual merits, they can also be seen somewhat as filler, leading up to the quite entertaining final act, which is essentially a post-apocalyptic musical episode of The Simpsons, with the family fighting off evil mutated versions of Mr. Burns and Itchy and Scratchy.  The plot of this final act is much darker than a typical episode of The Simpsons, but it does feature some pleasing moments, including the use of larger-than-life puppetry. I should also talk a bit about the play’s designation as “post-electric.”  I was curious to see how a play performed without the use of electricity was going to turn out.  However, other than the first act, which is lit entirely by handheld lights, the lighting of the play is fairly standard, even though there’s an interesting use of various different sources.  The sound of the play is entirely unplugged, though occasionally a megaphone is used to amplify the actor’s voices. Overall, I would say that Mr. Burns, A Post-Electric Play is a minor recommendation for fans of The Simpsons. ★ ★ ★ 1/2 | FAIR  Mr. Burns, A Post-Electric Play is playing from now until June 7 at the Aztec Theatre (1035 Gerrard Street E).
Tickets range from $29.95 to $59.95 and can be acquired by going to mrburns.ca or by calling 1-877-435-9849