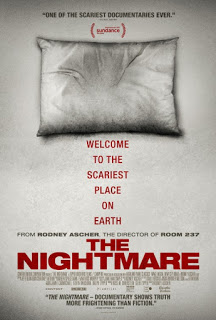 Rodney Ascher (Room 237) explores the terrors of sleep paralysis in The Nightmare.  There are people who suffer from a mysterious sleeping condition, where they feel like they are awake, yet they find that they cannot move.  Many of those suffering from sleep paralysis have visions of shadowy figures coming at them in the darkness.  Eight individuals tell their sleep paralysis stories, which are told through terrifying recreations.

Described as a horror documentary, Rodney Ascher tackles the subject of sleep paralysis through a series of well-produced, and often terrifying, re-enactments.  A common thread in many sleep paralysis stories are the “shadow men,” who appear in the room.  The film allows the stories to play out as, the subjects retell them, and the audience is allowed to make their own conclusions about what is happening.  Are these shadowy figures merely hallucinations or is there something else going on?

Probably something that’s real interesting about sleep paralysis is how it can be used to explain many supernatural events the people apparently experience, ranging from hauntings to alien abductions.  Of course, some of those who have experienced sleep paralysis believe that its not a natural occurrence, with many individuals even turning to Christianity after their sleep paralysis experiences, since they were convinced that it was something demonic that was tormenting them.

If there is any real criticism that can be given to The Nightmare, it is the fact that the film opts not to provide any real scientific reasoning for sleep paralysis, other than the fact that examples of this condition have existed all throughout history.  The film is probably more akin to shows from the 1980s and 1990s, such as Unsolved Mysteries and Sightings, which would use stories and re-enactments specifically to scare the viewer.  Without a doubt, The Nightmare is quite successful in that regard, with the re-enactments often being quite intense, with there even being the odd jump scare.

The subject of sleep paralysis is undoubably an interesting one and its depiction in The Nightmare will probably result in you having trouble sleeping afterwards.

The Nightmare screens on select dates this month at the Royal Cinema beginning today.