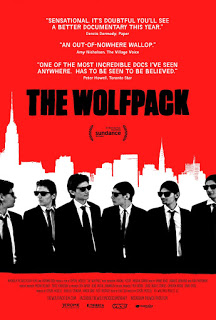 A group of home-schooled brothers learn about the outside world through movies in The Wolfpack.  The Angulos are a family of six brothers (and one sister), who live together with their parents in a New York housing project.  Because of their father’s distrust of society, the brothers never leave home and they entertain themselves by re-enacting the movies that they grew up on.  However, things begin to change when one of the brothers decides that it is time to leave.

It would seem to be that the main appeal of The Wolfpack is that these six brothers grew up with their only connection to the outside world being the 5000 films that their family owned.  In fact, it got to the point that the brothers would type out their own scripts to the films and re-enact them in the halls of their home.  Some of the recreations featured in The Wolfpack include Reservoir Dogs, The Dark Knight, and a Halloween party full of horror icons.

If it wasn’t for the constant movie references, The Wolfpack wouldn’t have that much going for it.  The main plot point of the film involves how these brothers have spent their childhood essentially imprisoned in their own home by their father.  While some of the reasons for this are discussed, the film doesn’t really get too deep into the effect that being forced shut-ins raised on movies had on these boys.  As the film progresses, the brothers discover the outside world and film makes it seem that they are able to adapt perfectly fine to this sudden change.  However, being a shut-in for practically your entire life is sure to effect people mentally and while there are some hints at this, particularly through the behaviour of the boys’ mother, the film doesn’t really go into the after-effects of visiting the outside world for the first time.

There’s also the questions brought up by the fact that a documentary is being made about this family in the first place.  While filming presumably started after the brothers started leaving home, filling in the blanks with home movies, there is still the question of why the director was given such access to the family, especially if the boys’ father was so against society.  There is a title at the end thanking the Angulo family for this access, so there was obviously some sort of mutual agreement.

Overall, I would say that The Wolfpack is an OK enough look at these six brothers and their love of movies.  However, moving past the recreated movie scenes and Batman costumes made out of cereal boxes and yoga mats, I wish that the film delved a little deeper into the consequences of this family’s living situation.