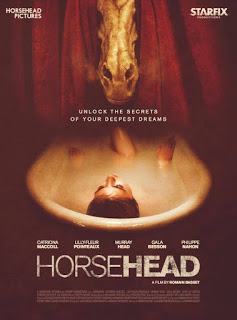 A young woman is tormented by lucid nightmares in Horsehead.  Jessica (Lilly-Fleur Pointeaux) has been studying the psychophysiology of dreams in an attempt to understand the recurring nightmares that she is plagued with, many of which feature a horseheaded creature.  After the death of her grandmother, Jessica returns home to an icy reception from her mother Catelyn (Catriona MacColl).  Jessica quickly comes down with a fever and remains bedridden, with her using this opportunity to improve her skills as a lucid dreamer.

Horsehead is the debut feature film by French filmmaker Romain Basset.  Even though there is much gory and grotesque imagery in the film, Horsehead can be best described more as a dark fantasy than a pure horror film.  Through her lucid dreams, Jessica learns more about the truth behind her family and why she doesn’t have a good relationship with her mother.

One thing that is quite apparent about Horsehead is that it is a pretty well-shot film, despite its disturbing content.  The primary setting of the film is an estate in the French countryside, which really makes the film feel quite pleasant, when it is not in the dark and disturbing world of Jessica’s dreams.  I don’t want to go into too much detail on the revelations made in these dreams, however there is most definitely a bit of an Freudian theme to the events of the film.

One element of Horsehead that I cannot fully grasp is the titular antagonist itself.  I’m sure there is some sort of symbolic meaning for horses appearing in dreams, however I also think that a demon with a horse’s head is an inherently ridiculous sight.  Perhaps it’s the fact that people wearing horse masks is a common sight at conventions these days.

Horsehead has a relatively small cast, with there only being like five or so central characters.  It was interesting seeing British actor and singer Murray Head, best known for the song “One Night in Bangkok,” appear in the film as Catelyn’s husband Jim.  It is established early on in the film that Jim is not Jessica’s biological father and it does not take long to figure out what her true parentage is.

Undoubtedly, I would say that Horsehead is not a film for everyone.  There are many scenes in the film which can be quite disturbing to watch.  Like I said earlier, the film is more of a dark fantasy than a horror film and there is not really much in the film that can be described as scary, except for maybe a jump scare early on.

Horsehead is now available on DVD and Blu-Ray in Canada through Black Fawn Distribution and can also be rented or purchased via iTunes.